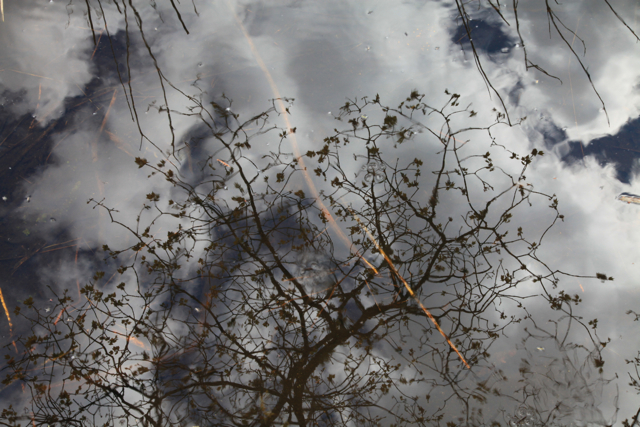 I did not expect sun today, nor
the greening of the grass.  First heat.
Wet dog.
We shed our coats along the path,
toss sticks in every ditch and pond,
turn inland. Hear silly frog songs:
stuck
broke
wet
cold
pond scum
wakes up           look  out
nude
girl

Notes
The photo is of our pond, where the frogs are not yet singing; the air is still cool so close to the sea.

When we stopped to listen to the first frogs emerging from the black pools alongside the road, Marike asked me if I thought I could write a poem that would mimic their sounds.  I imagine the frogs as ironic, laconic monosyllabic voices. Aural graffiti.

A shout out to poet Brian Bartlett, who reminds me that Thoreau writes about the language of the frogs in the "Sounds" chapter of Walden. Conveniently, the whole is online. I see as soon as I read it, that I've heard (or imagined) the frogs in an earlier state of debauchery; they are still testing their cups, not yet bragging into them.

Thoreau then:   "In the mean-while all the shore rang with the trump of bullfrogs, the sturdy spirits of ancient wine-bibbers and wassailers, still unrepentant, trying to sing a catch in their Stygian lake — if the Walden nymphs will pardon the comparison, for though there are almost no weeds, there are frogs there — who would fain keep up the hilarious rules of their old festal tables, though their voices have waxed hoarse and solemnly grave, mocking at mirth, and the wine has lost its flavor, and become only liquor to distend their paunches, and sweet intoxication never comes to drown the memory of the past, but mere saturation and waterloggedness and distention. The most aldermanic, with his chin upon a heart-leaf, which serves for a napkin to his drooling chaps, under this northern shore quaffs a deep draught of the once scorned water, and passes round the cup with the ejaculation tr-r-r-oonk, tr-r-r — oonk, tr-r-r-oonk! and straightway comes over the water from some distant cove the same password repeated, where the next in seniority and girth has gulped down to his mark; and when this observance has made the circuit of the shores, then ejaculates the master of ceremonies, with satisfaction, tr-r-r-oonk! and each in his turn repeats the same down to the least distended, leakiest, and flabbiest paunched, that there be no mistake; and then the howl goes round again and again, until the sun disperses the morning mist, and only the patriarch is not under the pond, but vainly bellowing troonk from time to time, and pausing for a reply." http://thoreau.eserver.org/walden04.html
Posted by Karin Cope at 9:30 AM