What the dog's nose knows, or the art of noticing with the dog (art walk challenge #1)


Just as birds need to fly and deer need to run, we need to walk....to be happy.
Enrique Peñalosa, Mayor of Bogotá

Every place structures our perceptions; so too, does every sort of being. We all know this, and yet we rarely attend fully enough, in our daily lives, to the implications of such insights.  While we might be quick to agree that what one notices while walking on a city street is dramatically different than what one hears or smells while out in the woods--the roar of traffic drowns out the subtle scrape of drying leaf against leaf in the breeze, or the lilt of birdsong--we're noticeably less willing to entertain other entities' or creatures' perceptual modes as a part of our own, unless we're trained observers of one sort or another.

And yet everyone who lives with a dog walks such a path daily: the dog regularly notices things we do not, and bit by bit, our association with a dog tunes our apperceptions to theirs. We see, by dint of daily walking together, that here, by this tree, is a particularly exciting scent, while that patch of grass there is somewhat frightening. The dog's responses begin to frame our own, even when we don't quite understand what is going on. For example, a friend who lives in urban Vancouver recently reported taking her dog, a young Great Dane, for a walk in the predawn morning. All of a sudden the dog began growling.  My friend neither sensed nor saw the trouble, thought her dog had been somehow startled by a blowing leaf. And then the lights from a passing car illuminated a row of coyote eyes. Smart dog! writes my friend, relieved to have arrived back home safely.


Often enough, what the dog senses is invisible to us, and thus appears somehow nonsensical, irrational, idiosyncratic. What might we see or understand, however, if we attempted to walk through the world guided not by our own imperatives, but by the dog's? And why stop there? Why not follow a deer path and learn to notice what a deer might?  What about following a line of current, or the trajectory of a falling leaf? How would we walk through or map the world differently? What would we hear or smell or see otherwise? What novelties would strike us? How would our inner sensory and kinesthetic maps alter? Would our experience of walking, itself change, and how?

Leaving aside for now the great epistemological debates about what we might ever know of another being's ways of knowing (culture and learning suggest we can share something on this front,) and the challenge of tempering or overcoming our tendencies towards anthropocentrism, would or could a simple set of exercises--"art walks" say--begin to help us to attune ourselves to alternately lived (and thus possible) interactions in the worlds where we live?

Such questions led to what I am calling my "art walk challenge #1: while out for a walk, maybe with a dog, notice and document zones where two or more life forms enter into conflict, avoidance and/or collaboration."


I made and annotated my own walk on and around the grounds where I live, in rural coastal Nova Scotia, and then invited others living elsewhere to do likewise. I offer a selection of notes from my walk, and others' responses below.  As I read over the responses I've collected, I'm struck by how like poetry they are--perhaps because poetry too is an art of aerial or subterranean attunement, a mode in or by which one hears or notices things that pass above and below the threshold of ordinary experience. Does this mean that poetry, too, is an art of listening with the dog? (Or sometimes, perhaps, with the deer?)


My notes from Art Walk Challenge #1 (24 October 2015) are as follows: "Here, the deer avail themselves of apples from our trees and walk on paths that we've made. But we also follow deer trails to the pond (human made) and through the woods.  The dog follows other deer paths, munches on crab legs dropped by gulls, digs in mouse holes, chases grouse. We come across a rat's nest a neighbour has tossed from a barn. Dog drinks from ditches and at the edge of the bog."

Friends responded as follows:
Devon Query (Eastern Shore, Nova Scotia) writes, "Out with the dogs down to our shoreline. A feather, no two(!) are consumed immediately.....small ones, gull feathers.....then a crab part by the other dog. Finally the piece de resistance! A large gray gull feather.....NOT to be consumed here....but ferried back to the house for the morning's amusement!Thanks gulls!"

Carol Bruneau (Halifax, Nova Scotia) sends along a picture, which she captions,
'Here's my deerstalker scenting prey in the urban wilderness:" 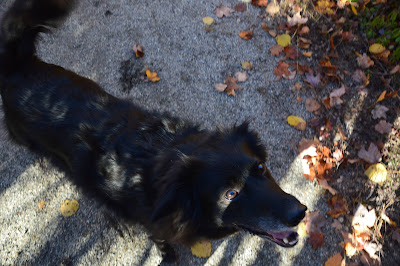 Faizal Deen (Ottawa, but remembering South Korea) is prompted by the video of Enya chasing a spruce grouse to write "Beautiful and free. Sabrina would go after the quails on Namsan when we lived in Seoul. It always made me nervous because had she caught one, we would've been fined and she could've even been taken away from me and euthanized. So, we always went to the mountain under the deep cover of night and she would run her heart out and chase all manner of beasts."

I note that Faizal's remembered walk documents not simply encounters or collaborations (don't the quail sometimes draw the dog on, and work to decoy it from a nest or another sensitive area?) but potential conflicts between his dog and quail (finding, flushing out and possibly killing birds in the dark), and potential conflicts between doggish pleasures and the law, which is to say, between the law and the dog's human companion (punishable by removal and death of the dog.)

Who knew that a simple walk could uncover so much? And doesn't it always, if we've attuned ourselves to notice?

Of course, the sort of "tuning" I'm describing here, and asking my friends and readers to consider practicing, is not always so romantic.  It is also a deep part of our social and historical experience, now muted by urban habits, the comforts of modern shelters and our typical patterns of consumption. A good hunter or a nomad for example, (whether human or non human) regularly must perceive as another does in order to survive. But then, so do children, any creature that is lost, or any person or creature who lives without adequate shelter or food. Nervy and alarmed, we learn to read others' patterns and pathways, and to map out escape routes and diversions, as well as others' garbage dumps.

From where I sit, in rural Nova Scotia, I cannot truly walk the routes taken by Syrian refugees as they flee the shifting and hostile landscapes of war and asylum. But I can begin to imagine these routes, in all of their heart-thumping horror and impossible hope--and indeed I must, and by so imagining be driven to act, if I am going to maintain that social awareness does any good good at all.


The end of September and it was all done: the pages checked and double-checked and the cover proofed in emails and phone calls back and forth between publisher, designers, copy-editor and me. Ten days earlier the version I'd corrected vanished from the book designer's in-box; for some reason her email server would not accept messages from any of my accounts. We waded through the details on the phone and I sent my marked-up copy from my partner's email account. Success! One more version to proof, which we did, and then everything was sent off to the printer. Now we wait, and sometime towards the end of October there will be a book, a tangible object to touch and to hold, to open, to leaf through, to read.

Where can you get a copy? You can email me, leave me a message in the comments section of this blog or via facebook messenger, or order a copy directly from Indigo Books here  https://www.chapters.indigo.ca/en-ca/books/what-were-doing-to-stay/9781897426753-item.html
or Nimbus Publishing here http://www.nimbus.ca/What-Were-Doing-to-Stay-Afloat-P7335.aspx


Meanwhile, I'm also planning, building a website for, and soon will be installing my first solo video installation, entitled Flows (Given Water).  The show features video haikus of meltwater, looped projections of shifting inter-tidal zones, and enormous silent projections of moon jellies propelling themselves through deep green seawater. The weather turns rainy, and my dreams, too, are submerged in water greens and dim anxieties: is any of it good enough? Have I worked through my ideas fully enough? Will others see what I see, or wish to stop and muse in these spaces of drift and damp? I hope, and will know more in time.

Posted by Karin Cope at 8:38 AM No comments: