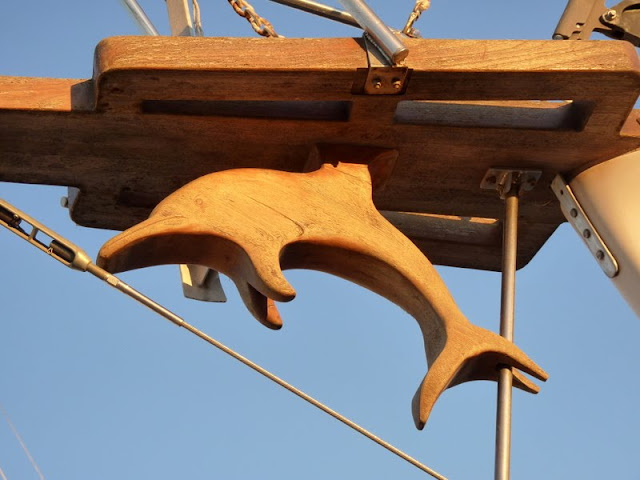 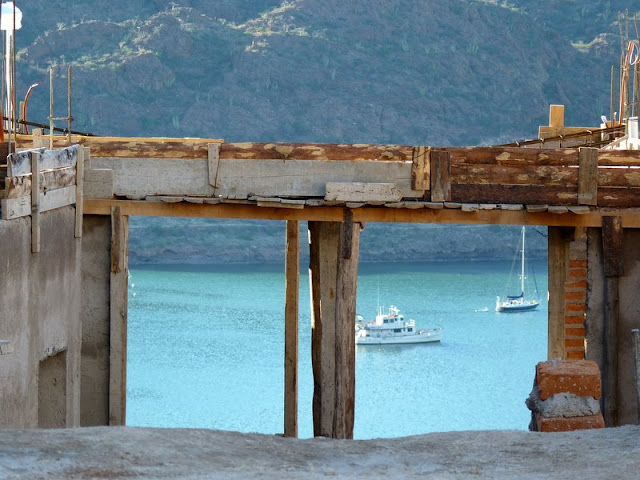 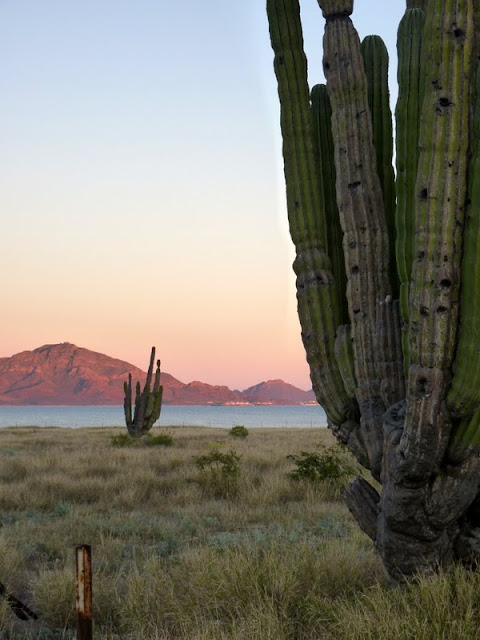 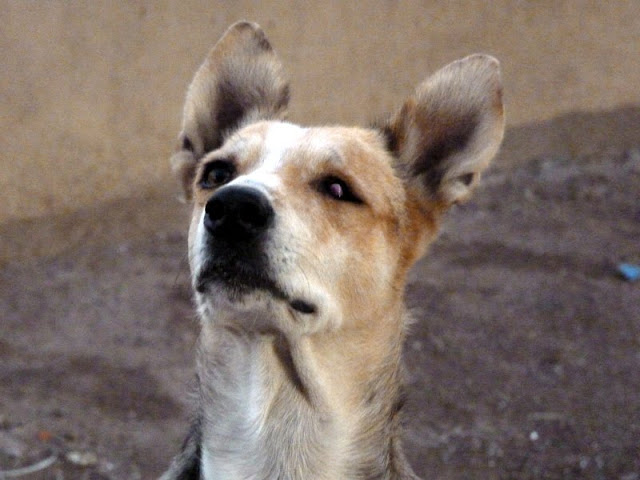 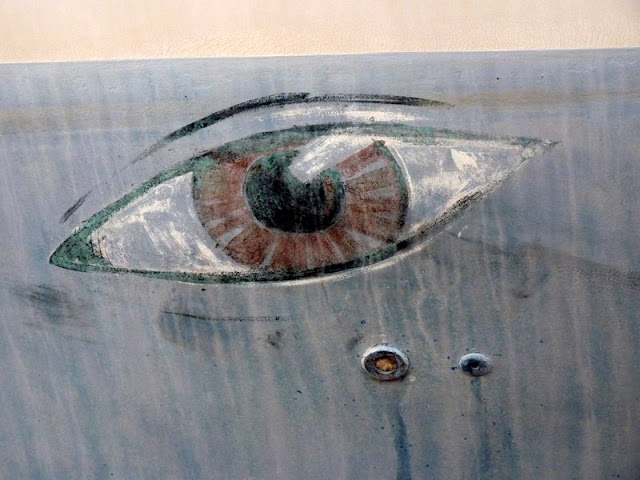 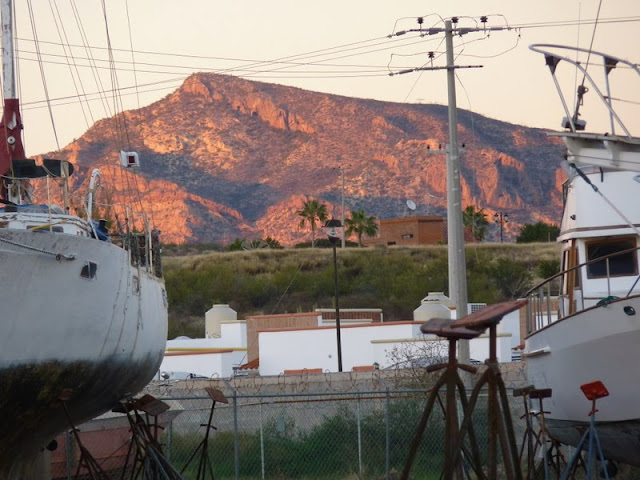 On the bus to Mexico! 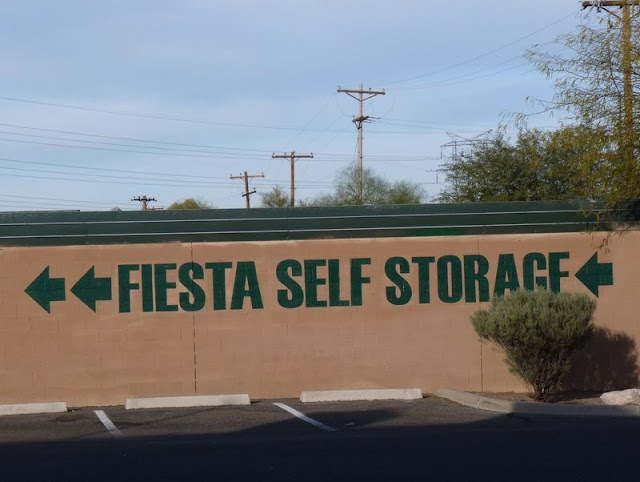 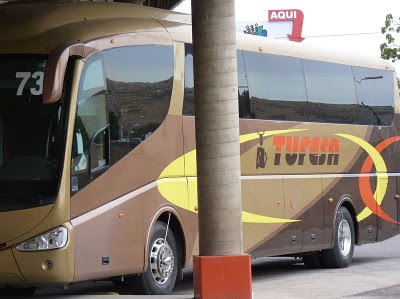 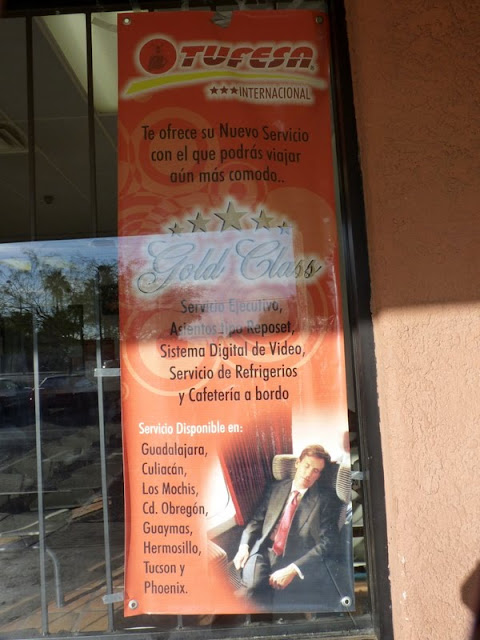 Tucson
It is early morning and we are ready to get on the bus to Mexico.  Thin cirrus clouds streak across the sky, combed into strange upswept forms by winds blowing from the mountaintops.  Sere black earth, desertic plants growing in the crevasses, then broad, almost fertile valleys. Here and there a horse ranch. Cattle ranges. 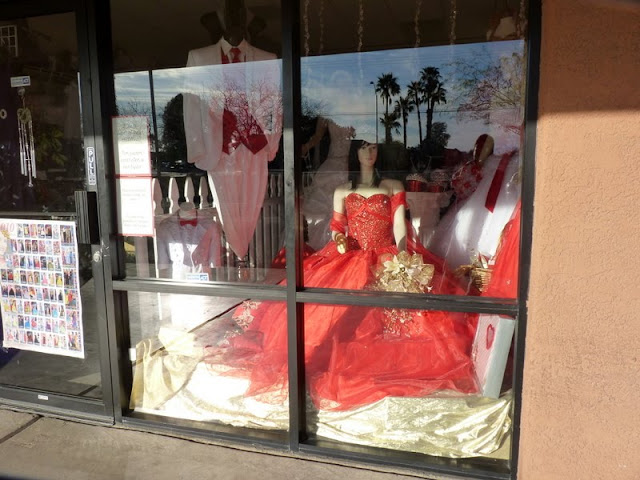 As soon as the sun rises, the US Air Force practices: fighter jets tear into the sky, one after the other, then rise and bank.  They peel off one by one and roar back towards the base, their afterburners crackling, the air vibrating with an infernal and terrifying din.  Triangular aircraft with long cone noses, they rip through the air much faster than you think they could.  Than you think they should, shooting across the sky twice as fast as your eye seems to move. I am always frightened by these monstrous mechanical birds, thinking how terrible the passage of their shadows.  I shudder, as if I’ve been visited by the angel of death, which in way, I suppose I have. 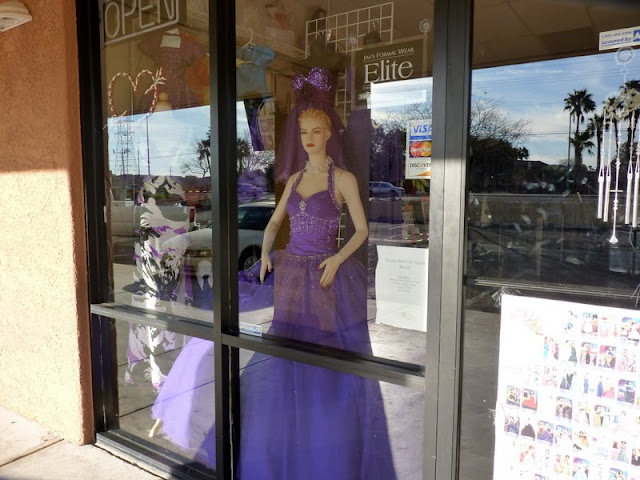 At the bus station, we pass our time peering into tiendas de belleza, dress-makers’ shops, a photographer’s studio; all of them specialize in first communions and quinceaños celebrations.  Everywhere, mannequins are dressed as brightly coloured princesses, butterfly daughters, daughters of love, soon to be ready to be given to love.  Behind us, palms stutter down the boulevards.  Finally we pull away.  Then stop.  The Tufesa office has called the bus driver; someone left her purse in the washroom.  We back into an alley, turn around, return, and the purse is handed up onto the bus, with much laughter and chistes for the grandmother who has forgotten it.  She is shy and rattled by being in the US, where she has been visiting her daughter and grandchildren, tired from having boarded in Phoenix well before sunrise.  She becomes much more animated once we cross the border into Mexico. 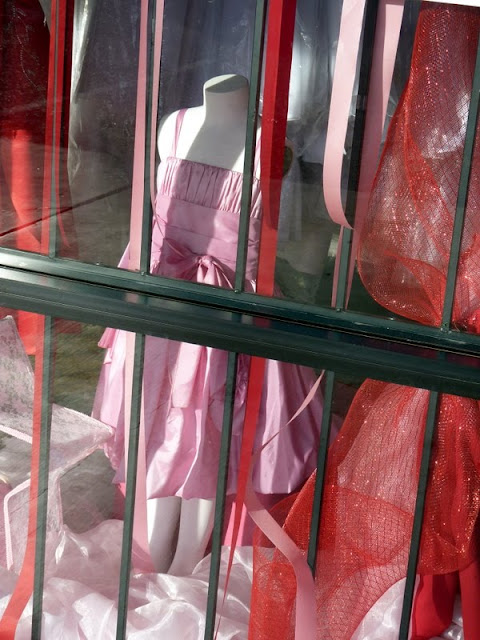 Nogales
In Nogales now.  The silvered tin dome of a cathedral glimmers in the morning light.  We turn down narrow streets, headed for the border, which divides the town.  As we approach the Mexican side, signs sprout up everywhere , selling goods, services, food.  I am instantly and completely happy. 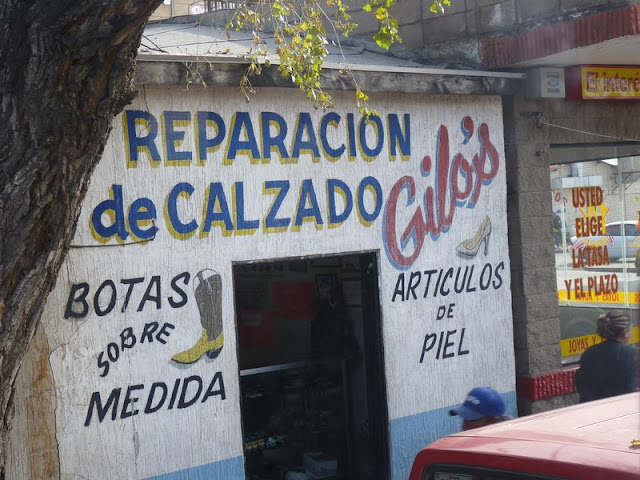 We stop at the border.  Our bags are unloaded onto a trolley and everyone is ushered into a small room.  But Marike and I are sent elsewhere, to Migracion, where after showing our passports and filling out a form and paying a small fee—240 pesos or $21USD—and acquiring all of the necessary official stamps, we are admitted to Mexico for 180 days.  (A small window of dream and possibility creaks open, birds fly through.) 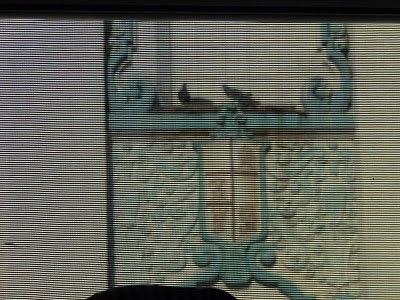 When we return from Migracion, our bags have been loaded, and everyone on the bus is waiting for us.  The women across the aisle hold plates of steaming tamales, a quesadilla.  Pungent aromas fill the air and the bus pulls away. 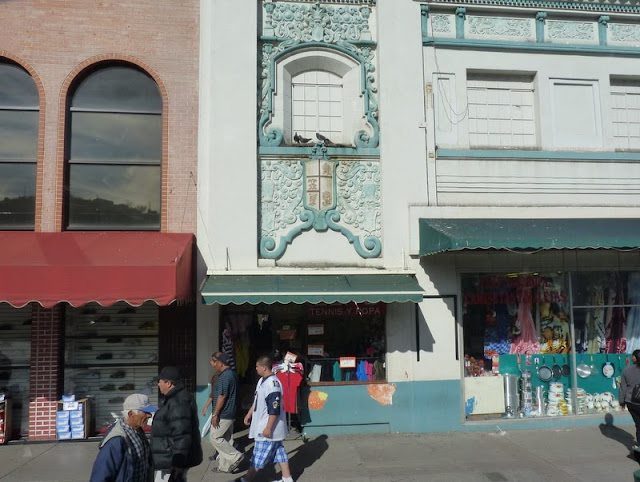 Soon we are in the countryside.  Vast tracts of greenhouses line the road; small workers’ villages gather nearby.  The earth is dusty.  Soon the road climbs into open countryside—here and there compounds with pick-up trucks, horses, some cattle, a trailer—but the rest is desert scrub.  I fill my mouth with the names of plants that dot this landscape: ocotillo, saguro, palo verde, mesquite, agave, nopales. 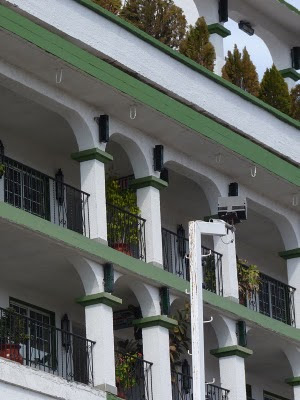 Hermosillo
Hermosillo lies in a broad flat plane inland; it is a commercial centre in the heart of the state of Sonora.  But like every part of Mexico closely linked to the US, it is on hard times now.  Abandoned car dealerships, hollowed buildings, graffiti-covered walls.  And as always in Mexico, everywhere, building, building in and from sand.  Rebar reaches into the sky from an unfinished tower. How long has it been like that?  How long will it stay?  Until the next flood, perhaps. 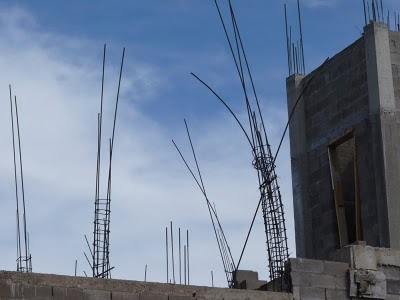 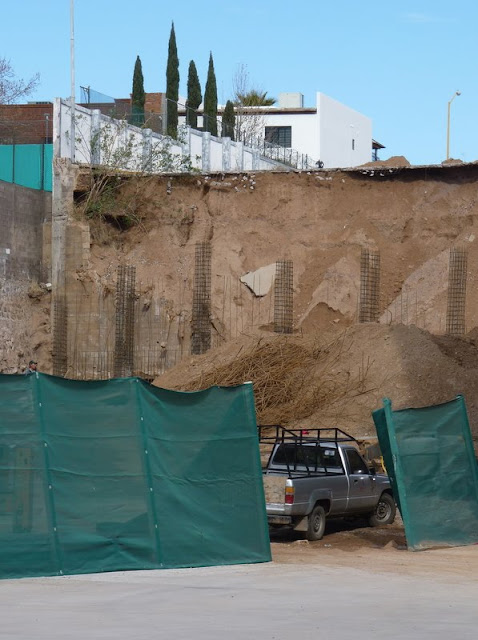 Guaymas/ San Carlos
Shapely red coastal mountains come into view as we approach San Carlos and Guaymas, plantings of palm and bougainvillea, then there, finally, the sea!  It is cloudy, cool.  Rain hangs over the mountains.  We climb down from the bus, gather our bags and hail a taxi.  The baggage handler helps us haul everything to the front of the station, then lift it into the cab.   A la marina seca!  We arrive just before closing time; the taxi slips through the gates.  We drive down the line of boats in the work yard.  There’s Quoddy’s Run, with her painted waterline eyes!  We unload our bags, and one of the yard workers comes to help us heave them up the ladder onto the boat, and to open the lock on the companionway.
Everything is covered in layers of fine red dust, and soon we are too.  But we are happy to have arrived, with ourselves and all our goods intact.  I make the bed, Marike checks the batteries and hooks up the propane and makes sure we have water.  We eat, then sleep to the sound of rain. 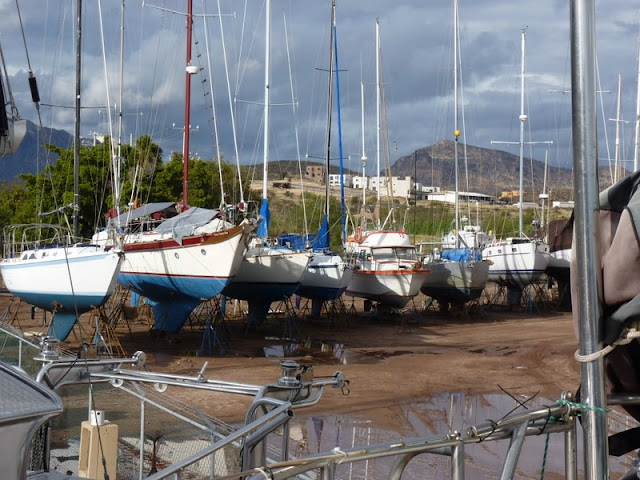