Out Out Into the Sea 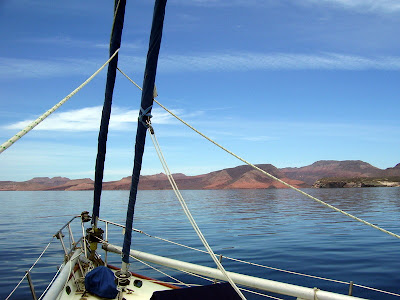 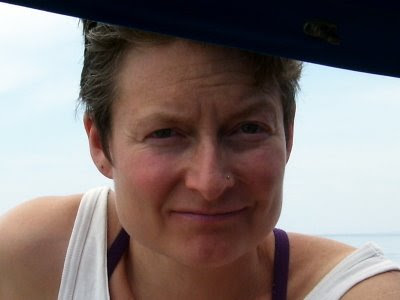 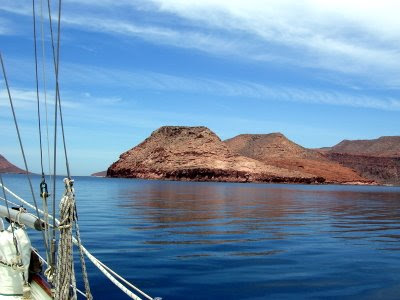 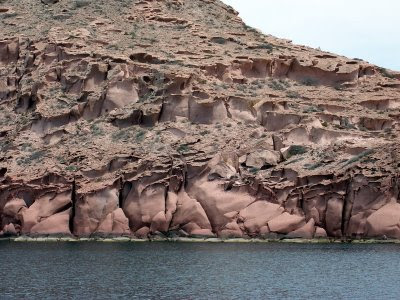 1 May 2009
Today we left La Paz and headed out into the Sea, to anchor in the islands. At first we were going to go to Isla San Francisco, but then changed our minds and turned into Caleta Partida, which is nearer. It was hot, a southeasterly breeze was blowing and we anchored in the gap between Isla Espiritu Santo and Isla Partida. Then we inflated the kayak, got out mask, fins, and goggles and jumped into the water. It was cool, but definitely warm enough to swim. We tried out the kayak first, but couldn’t steer it in the waves, since it has a flat bottom and no rudder. So then we swam against the current, towards the land and back again.
Then a deck shower—the day so hot we had to add cool water to the sun shower to keep from being burned.
Now the wind is dropping, birds are circling the cove, and, as the angle of the sun drops, the greens of the hillsides—cacti and other vegetation, as well as striations in the rock—become visible. These hills are like hills I dreamed two nights ago—red and sere, but dashed with emerald.

2 May
A lazy slow morning. A coromuel blows all night, tossing us up and down on the waves; now a skiff of breeze scuffs the surface of the water; clouds provide a bit of shade, and in the shallows, by the fishing camp, gulls cackle and wail. Now and then pelicans skim in from the Sea and circle the bay, and sometimes we see the tips of a floating ray.
The water is bluegreen, the hills red and purple, the earth scarred a deeper red where the steep incline favours rock falls. There are caves in the upper reaches of some of the hills, and sagebrush and mesquite cling to the ledges, while cacti stutter across the ridges, stark silhouettes against the sky.
It takes time for the shapes to move into you, time to enter the landscape, time to settle into a different rhythm.
Marike inflates the dinghy; I’ve done some laundry in a bucket and hung it from the lifelines. Now I’m trying to figure out how to draw the patterns the wind makes on the water; it is hard to set down a line that would anchor so much movement. Soon we’ll go ashore.
Later
We walk the fine strand, crunching over stiff balls of crushed shell piled at the outskirts of hundreds of crab burrows, but we don’t see any crabs. Then suddenly there they are: hundreds and hundreds of tiny fiddler crabs no larger than a thumbnail, all in a swarm. The males wave their chief sexual attribute, an enormous claw as large as their bodies over their heads as they scatter across the landscape, fleeing the water, fleeing us, migrating inland. Marike finds a serviceable cap tossed up on the beach; a tiny lizard skitters from beneath it, startling her when she picks up her find. We step over cactus driftwood, the spines gone, the outer coating peeling away like bark, and the lacy wood beneath, protected by long leaf-like structures.
We get back in the dinghy and motor slowly through the shallow gap between the islands and alongside the fishing camp; birds stand in the shallows and the fishermen are asleep. It is high tide, and we slip through to the other side of the island where it is rocky and stone pillars rise like some enormous outdoor cathedral. Clinging to the edge of the island is a tiny yellow shrine, where the fishermen cross themselves before heading out to sea.
We return to the boat as the sun begins to sink behind the highest peak.
24° 31.78’ N
110° 22.67’ W
Images
Approaching Isla Espiritu Santo
Karin squints at the sun (photo by Marike Finlay)
Caleta Partida
Rock formations in Caleta partida