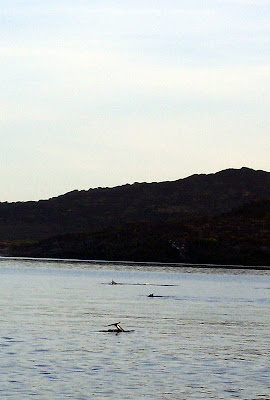 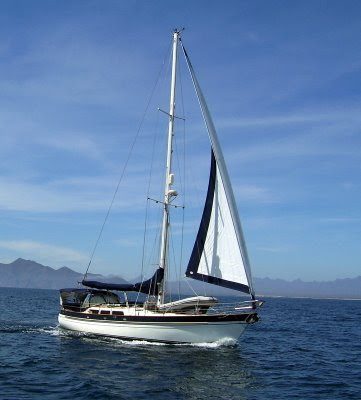 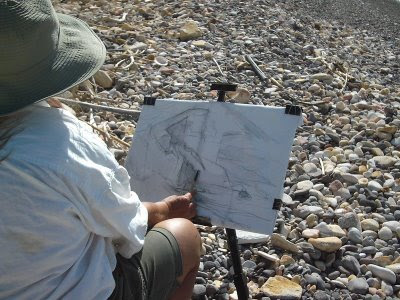 We arrived in Isla Coronado yesterday afternoon, the tenth boat to anchor in the cove along the sandy spit. Dee and Paul were already there, on Blue Pteron, waiting for us. We anchored, dropped the dinghy in the water, opened the hatches and jumped in. Whee! The water was cool and green and delicious. We swam towards Blue Pteron and Paul and Dee leapt overboard and swam out to meet us. So we had a reunion in the water, with rays swimming beneath our feet.

Later Paul cooked up some chiles rellenos and we traded stories about the last month: who’s lived, died or changed, and what the political winds suggest. We listened to music, Marike and I danced, and we told stories about our childhoods and young adulthood. After midnight, Marike rowed us back to our own boat.

We awoke to dozens of dophins in the cove leaping, swimming, breathing, fishing. They circled the boats, tumbled through air and water, squeaked and squealed. The dew was still heavy, dripping from the canvases, and the morning light soft. Marike even saw a whale spouting in the distance.

Later we pulled up anchor and motor-sailed in the still calm to San Juanico, one of the most spectacular places in the Baja. As we were turning into the harbour, a band of fog moved in from the sea and the wind blew up. Paul and Dee picked their way into a sheltered anchorage behind a reef; we eventually followed, ate lunch and took a siesta while we waiting for the fog to come in or go out and the wind to die down.

Eventually the fog scattered and Paul ferried us over to a stony beach scattered with driftwood and the spiny remains of pufferfish and dead pelicans. On the hill we found rock piles, two cross markers, a burnt out candle and what looked like a grave or two. A tiny lizard tended the funeral garden. A perfect site, Dee thought, for an episode of what she called “extreme painting”—here that meant painting for several hours in high heat on shifting stones in excessive light and plagued by sand fleas, guano flies, wasps and the stench of bird rookeries.

I watched Dee paint for awhile, but the combination of sun and insects was too much for me; I am not yet an “extreme painting” athlete. I went to hide in the shade near some shallow caves in the rock filled with green plants, driftwood and trash. Tiny grebes dove in the shallows, a hot wind blew out of the hills and clouds streaked across the sky. I found a bit of broken bone eroded by the sea and turned it over in my hands. It was heavy, its open cells solid. It was long and flat—not a bird bone, but from some larger creature, remains perhaps of the cattle that sometimes graze here, or a large sea creature, a whale or sea lion.

Dee paints on a stony beach in San Juanico