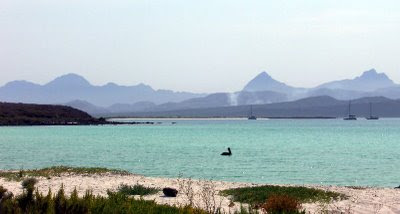 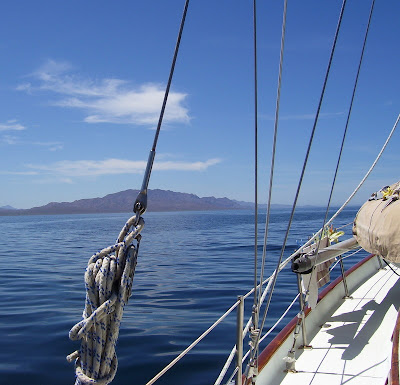 I think I saw a blue whale fishing and blowing in the channel this morning.

We were wakened by the usual sunrise breakfast run. At the foot of the cove, dozens of dolphins splashed and rolled and fed and dove and squealed and exhaled, one dolphin repeatedly coughing, kamikaze pelicans adding to the fray. And then out in the channel, I heard a very loud, very deep exhalation, then another—and looked up just in time to see the dark form roll into a long slow dive. All morning, all around us, the feeding continued. The whale’s breathing awoke Marike; she stuck her head up through the companionway to see what she thought must be a dolphin right next to the boat.

Isla Coronados is a seagull rookery. Yesterday, we visited all of the beaches around the cove by dinghy. On one, as Marike walked towards the end of the beach, every gull in the area rose up and flew at her, crying out.

Just above the tide-line, we could see the gulls' nests, shallow indentations in the sand ringed about with bits of seaweed and downy fluff. Rays skittered through the water, fleeing our shadows, and here and there, in the volcanic stone-pile reefs at either end of the beaches, brightly-coloured angel fish and black fish with brilliant orange tails swam. I even saw a large eel.

All around, we hear the birds call; the cackling of the gulls is most constant, but overhead, ospreys screech and pelicans flap their wings, and closer to shore, songbirds chirp and sing. And all around, hundreds and hundreds of tiny grebes swim and dive.

It makes me happy to see all of these animals, even to see them squabble. Yesterday, on our way here, we saw a very self-satisfied gull paddling about with a huge gob of fish in its beak—so large it couldn’t swallow. The gull paraded about like a lab with a ball in its mouth. Finally it dropped the chunk into the sea, nipped a bite and picked it up again—at which point a frigate bird noticed and began diving at the seagull. In seconds, two blue-footed boobies were in on the action—all three larger birds menaced the gull until it finally lost its nerve and some of its meal to the frigate bird.

The law of the sea is not just “survival of the fittest.” It is also, “you shall share, whether you want to or not.” For example, in San Juanico, while we were playing and painting on shore, mud wasps began to build elaborate cone-shaped nests on our boats: colonizing the colonizers. On Isla Coronados, thirsty bees threw themselves into our paints and water, and while we were anchored in Ballandra Cove, dozens of wasps sipped from the dripping edges and waterlogged terry nubs of our washcloths. We have no choice but to share, to become a bit less frightened of stinging insects. Water is what they want, not blood.