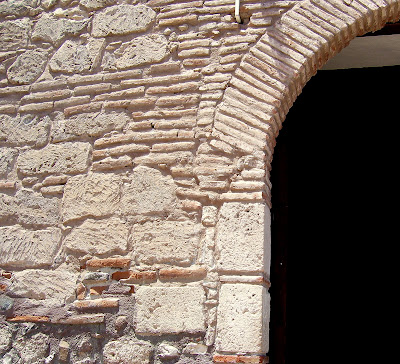 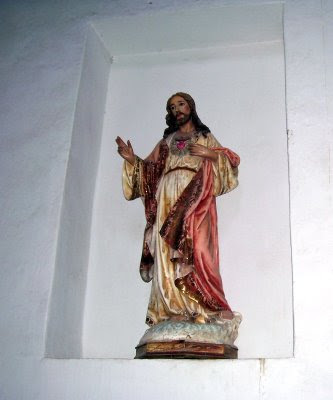 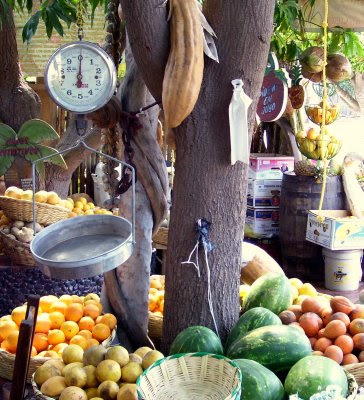 Two weeks in the Sea and we are running out of fresh fruit and vegetables.

Marike slices the cheeks from the last mango, scores them, and we wade into the water and dip the ripe fruit in the brine and suck it from the rind. The mixture of salt and sweet is delicious; we rinse the sticky juice from our hands and faces as we swim. The last jalapeño is puckered and brown at its stem end, cilantro, avocados and tomatoes long gone.

I seed and dice the pepper with a bit of onion and garlic and toss it with matchsticked carrots and lime juice, some olive oil, salt, pepper—that does for a salad until we can get to Loreto, anchor in the morning calm off of the breakwater, and dinghy ashore to re-provision. While there, we will stop in a gallery and an internet café, and drink freshly squeezed juice in a health bar tucked under fruit trees, where an ancient iguana slowly munches scraps, wild birds visit the parakeets and other exotic birds in cages, and oranges and limes drop into the stone courtyard, dusty and over-ripe.

Loreto sits astride a low sandy shelf that stretches between the sea and the foothills of the Sierra de la Giganta. Palms and fruit trees supply some shade and a whisper of damp coolness near the malecón in the city centre; otherwise, in this season, Loreto is hot, dusty and dry. It is a small city about one-third of the way up the eastern coast of the Baja peninsula—several hours from La Paz and Los Cabos by bus or car, an hour by small plane, or several days’ sail.

Just offshore lies a group of islands we visit again and again: Isla Coronados, Isla Carmen, Isla Danzante…These islands, along with two or three others, make up the Parque Maritimo Nacional Bahia de Loreto, a federally protected conservation zone. The islands help to shelter Loreto from the open sea. A now abandoned saltworks on Isla Carmen also provided employment in the community for many years. Now largely reliant on fishing and tourism—particularly a large-game sport fishery—Loreto subsists on an economic margin as narrow and battered as strip of dusty land squared by its streets.

The first permanent Spanish settlement in the “Californias,” a zone that comprises the coastal territories of the Baja California in Mexico, and present-day California and Oregon in the US, the 1697 Loreto mission was known as the “Cabeza y Madre de Las Misiones de Baja y Alta California” (the Head and Mother of Missions in Lower and Upper California)—a slogan carved over the entrance to the Loreto mission chapel. Founded by Jesuit Padre Juan Maria Salvatierra, the Loreto settlement anchored Spanish governance of the coast and missionary expansionism until 1829, when the capital was destroyed by a hurricane. Resettled in the mid-19th century by immigrants, many of them English, the town has remained a sleepy backwater—with international connections.

One of several ports slated for intensive development by Fonatur (Fondo Nacional de Fomento del Tourismo), a government agency charged with building extensive infrastructure for tourism—or as some have put it, turning beaches into resorts and cash—Loreto has not boomed quite so much as Cancún, Ixtapa, Los Cabos, or even Huatulco, other famous Fonatur sites. (Ron Hall, a writer for Condé Nast Traveller, observed, in 1993, that Fonatur seemed to be dedicated to building “high density holiday cities.”) Loreto’s small scale and relative dearth of condos and other expensive developments make it a far more interesting place to visit; the city has a small-town feel and friendliness, and gross disparities of income are less evident at every turn than in other Fonatur centres.

Still, since the swine flu and Mexico have become disastrously synonymous this month, and the economic downturn, particularly in the US, has struck vigorously at visitors’ extravagance, Loreto is suffering. Acutely. We were just about the only tourists in town—as many Loretanos told us, whether desperately pleading with us to book a night in a new hotel or joking, ironically about la influenza. Hysteria about the flu is utterly over here: no one wears face masks, and the children are all back in school, the churches open again. What has replaced that hysteria is grimness: there are no visitors, nor, this year, are there likely to be many more.

We spend far more than we can afford here—buying blankets, gifts, a painting, lunch, groceries, a cab ride back to the dock where we load up our dinghy—with the help of six dripping diving boys, each vying to carry more, or tend our lines in exchange for a few pesos.

“I feel like we have to stand in for ten tourists,” Marike says. “We love the nature here. We use their land and air and sea. We have to leave something behind. It’s just not fair otherwise.”

She doesn’t say it, but I know we are both thinking about the stories we heard over and over again as we prepared to leave the US for Mexico by boat five years ago; without exception, every story was about how a smart gringo could get something for nothing in Mexico—a dorado with a banana peel, a meal for a used battery, a diving excursion for a beer. No reflection at all on the price of greed: the environmental devastation it has wrought, the poverty, social, economic and spiritual that trails in its wake.

Are we really ready to think about such things now, we North Americans pinched by the economic downturn? I suspect not.

Or not yet. We wait for things to return to the way they were, we inheritors of the earth, meanwhile expanding our dominion…..

18 May 2009: Canada finally lifts its advisory against “non-essential” travel to Mexico.

Stones and bricks of Loreto Mission