The end of "fine clear weather"? 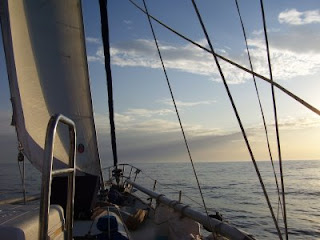 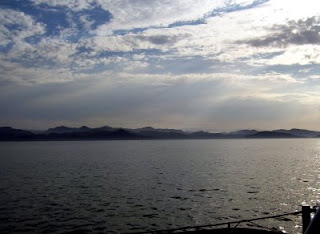 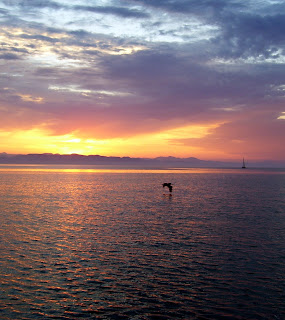 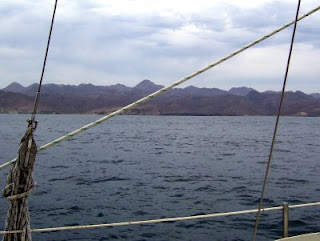 Sooner or later the sea always punishes complacency. Its shifting moods snap you to order, and reacquaint you with what, in day after day of “fine clear weather,” seem cumbersome and unnecessary precautions.

The sea always returns a proper harvest to slack habits and scant attention; its justice feels biblical because the water is at once so vast and impartial. Quite literally, the ocean cares not one jot how or where you are; preparation for adverse conditions can be a sailor’s only good defense.

It was not as if we’ve not had warnings. The weather is unsettled; moist air gathers over the mountains, clouds streak across what was, until this week, a strictly blue sky. There are sudden temperature shifts; fog rolls in and out, and sometimes it seems as if we hear a rumble of thunder to the south. Hurricane Season officially began in the Pacific last Friday, May 15; squalls charge up and down the coast from Colombia to Acapulco: “convection” is definitely in the air.

Last night after supper we watched lightening play in the clouds just to the northeast. We watched for hours; the glare was always in the same place, sweeping flashes of yellow, red and blue. That should have been warning enough to haul the dinghy up onto the deck and take down the tarps, our shelter against the blaring sun.

A cautious sailor would do these chores unstintingly every evening as the sun was setting, and then every morning, when not underway, launch the dinghy and affix the tarps to the boom and lifelines again, keeping the deck and cockpit cool and shaded.

But we’ve had so little wind, such unrelenting stillness and heat, such “fine clear weather” as our weather forecaster loves to sing out, that we’ve let slip our guard, our habit of being prepared every night to haul up anchor and run out to sea, away if need be from the stony hazards of land. Marike at least had the presence of mind—it was the lightening perhaps that made her think thus—to plan how we might speedily haul down the tarps if the wind came up in the night. We’d cut all of the guy lines with a knife and then just roll the tarps up, as quickly as possible. The dinghy, we agreed as we discussed the scenario, could be towed if need be—although high winds and seas do overturn them and rip them away. We took some comfort in the fact that we’re practiced at hauling the small boat aboard with a halyard. We can raise it in under two minutes and lash it to the deck.

At 1:30 am the wind began building from the southeast--cool sea air rushing toward the super-heated desert mountains of the Baja. We awoke, listened, said to one another, oh it’s just a little thermal, it will pass; we turned and tried to go back to sleep.

But the wind did not diminish, and soon the boat was rocking up and down on short steep little waves that trailed long strings of white phosphorescence as they capped and broke across the shallow anchorage.

The night was very dark; clouds covered the stars and the half-moon had not yet risen. The anchor chain tugged and groaned, exactly as it should.

Nothing terrible was happening, but the wind was still building and the tarps were taut, carrying us forward a bit, like sails. It was time to cut them down, first the tarp on the foredeck, then the larger one over the boom. We crouched forward on the bucking deck, keeping our centers of gravity low and passed the rigging knife back and forth—one sharp stroke and each line was down. Cut, cut, roll, cut, cut, roll. We hung on tightly so that neither we nor cloth were borne aloft, unwitting para-sailors.


The rule at sea as your feet shift beneath you is “one hand for yourself, one hand for the boat.” This makes many tasks slow and very arduous—just try cutting and rolling and hanging tightly onto a tarp and passing a knife back and forth with one hand while you bounce up and down madly and the wind tears at your shirt. Saltwater cowboys all! One false or stupid move and things very quickly could become dire.

As we were stowing the rolls of tarp—I lashed them to the rails that run along the top of the house—our kayak paddle unstuck itself and clattered to my feet. I shoved it against the bulwarks, cursing myself for not lashing it in place when I’d stowed it beside the boat hook two days earlier. Now I’d have to do that knotting too, bouncing in the dark, with one hand, each gesture so much more difficult than it would have been.

The wind was ripping along at about 30 knots now. Marike secured the dinghy with a double line behind the boat and I closed hatches and port lights in the bow, where a breaking wave might toss water into the boat. Then we watched for a bit to see how the other vessels in the anchorage were sitting—this was a dragging wind for anyone not anchored well. Lights were on here and there; a figure would crouch forward, check the anchor chain or bridle and crawl back.

In half an hour, the wind dropped, then died. As it did, the moon rose over the jagged rocks nearby and glinted on the inky water. And now the awful slop, a side-to-side rocking began as the boat tuned to follow the movements of tide rather than wind, and the swells generated by the wind wrapped around the corner and into the anchorage. Short violent jerks, side to side, wrench open latched cupboards, rattle crockery, pitch drawers from their housings and set bottles and cans stowed in the bilge or hull to rolling. Any unsecured thing goes flying as we roll 25 degrees out of horizontal on each side, beam end to beam end.

It is impossible to sleep in such demonic rolling; we turn 90 degrees and wedge ourselves sideways in the bunk to keep from being hurt, but we’re still tossed back and forth in a grotesque movement that sets our inner organs to sloshing.

Finally, at dawn, we stagger up, lash the dinghy to the deck, haul up the anchor and set out into the crashing rocking sea. Marike throws up the staysail to steady us.

Under grey clouds we motor, tossed side-to-side, the 45 miles to the next, better-protected, anchorage. Just about every other boat in the area does the same.

As we are crossing one bay, a fin whale surfaces nearby, dives, then re-emerges, blowing. We see its eyes: Sillies! it seems to say, when the surface is surging and raging like this and you haven’t any wind to steady you, you should do what I do: dive!

But we’ve not mastered that art yet—we don’t really have the craft, or the bodies, for it. But seeing the whale is our reward for being up and on the water this morning.

We’ve gotten off lucky we figure, with a slap, a little warning: sharpen up or you’ll lose more than sleep!

--As if preparation were the same as prevention, as prediction or a promissory note in our favour. In fact, preparation is none of these things. It is like exercise: a matter of prudence, of training and readiness for difficult conditions; cultivating it increases your odds of survival. But it is also something like prayer, as we fold and stow in benign conditions, “just in case”; it reminds us of our smallness, our inconsequentiality, and our hope in the face of the vastness---hear us now and at our darkest hours, amen.
Posted by Karin Cope at 4:02 PM