Lost and Found on Land 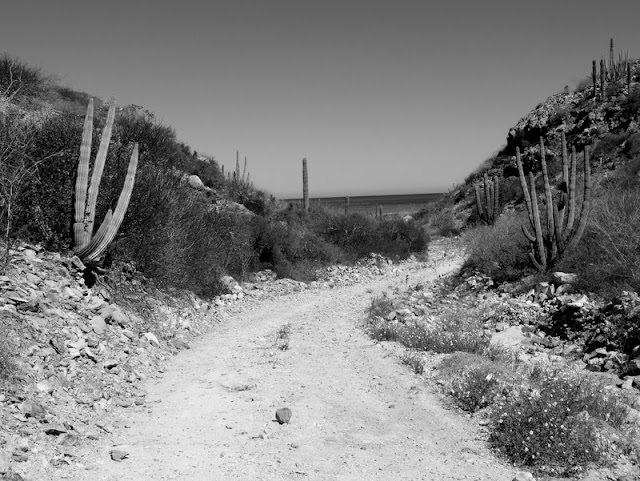 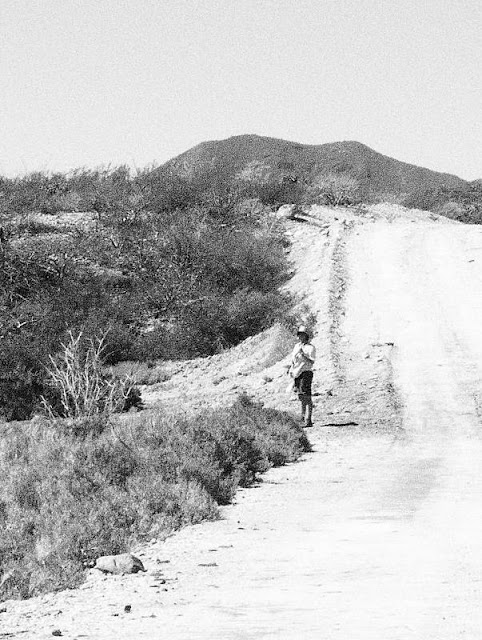 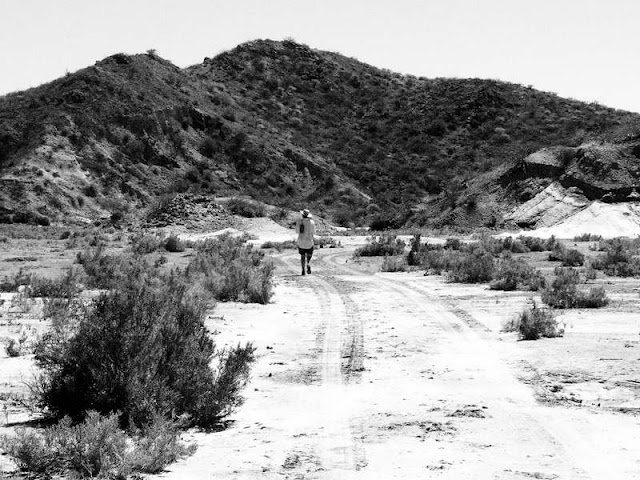 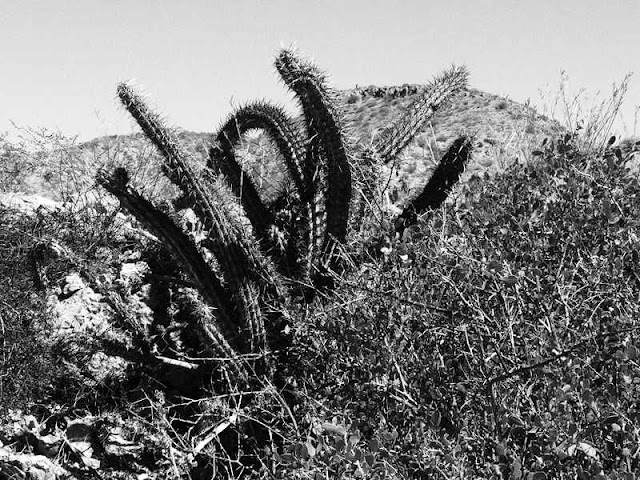 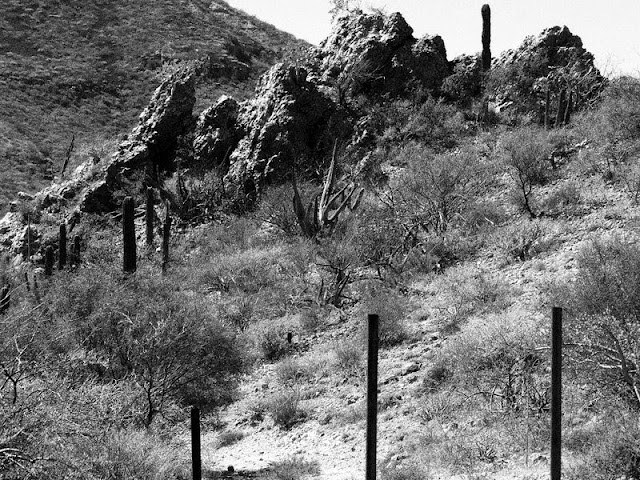 Today the wind died down a bit and we went ashore.  We hauled the dinghy way up the beach and went for a long walk up dry creek beds and down dusty roads....Saw wild fossils, volcanic rock, all kinds of cacti living and dead, the desert in flower, birds of every sort, tracks of horse and cattle, even the dried skull of a cow of some sort, rotten hide tossed beside it, by a brackish waterhole.  I took pictures of everything, all in black and white so they have the flavour of an old Mexican movie from the 50s. 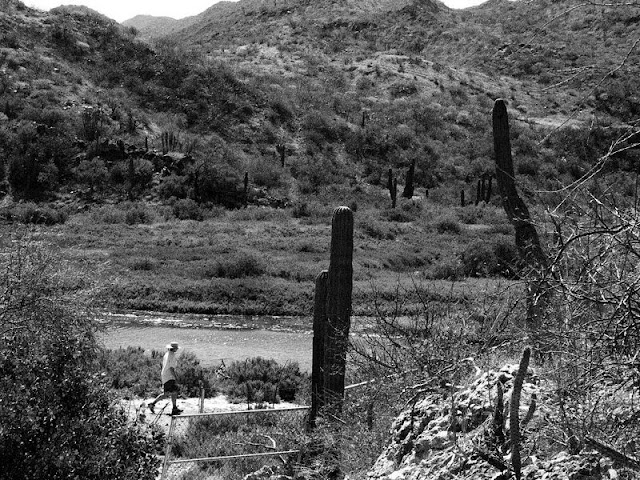 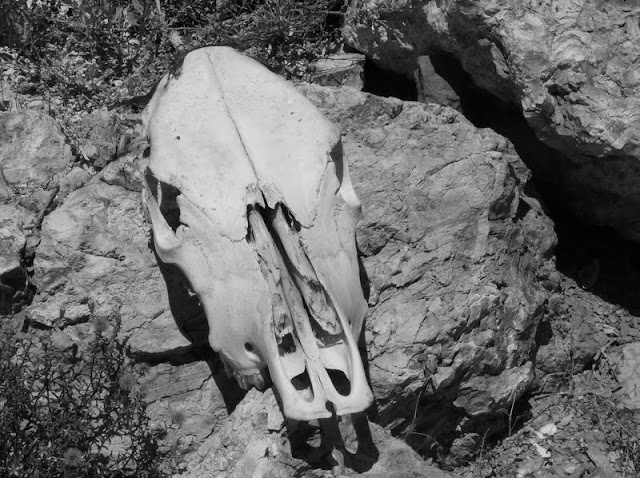 In fact, I got so busy taking those pictures (especially of the skull) that Marike got really far ahead of me and I lost her!  And the trail.  It led beside the brackish waterhole to the beach, and then along a ridge. But I was far enough behind that all I was really following was Marike's hat.  I thought. 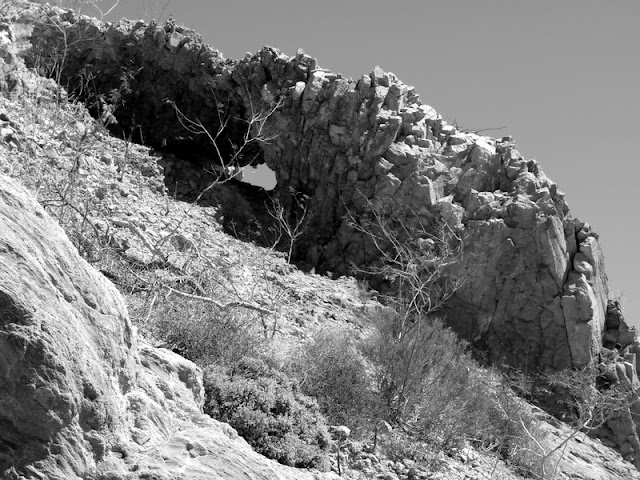 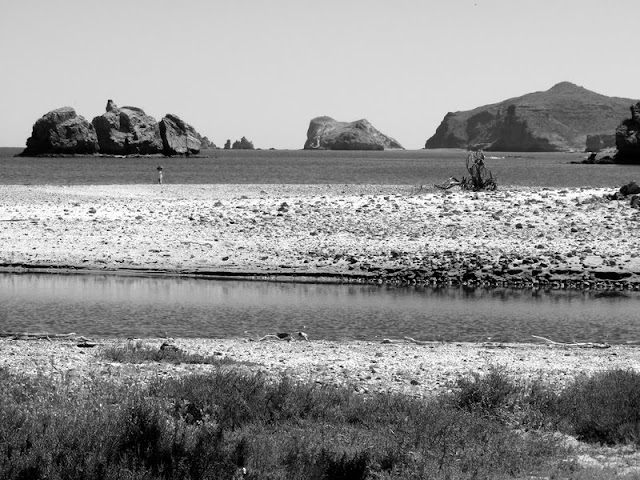 Turns out when I got to the beach--certain that she was WAY down the beach ahead of me talking to someone--that the hat-wearer wasn't her at all, but another sailor in a wide-brimmed floppy hat. And a beard. 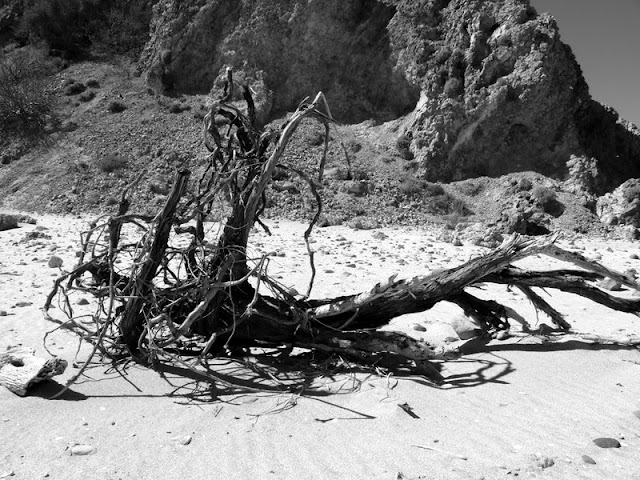 It was hot, the sun high, I couldn't find the trail, and I was thirsty. Marike had the gatorade. 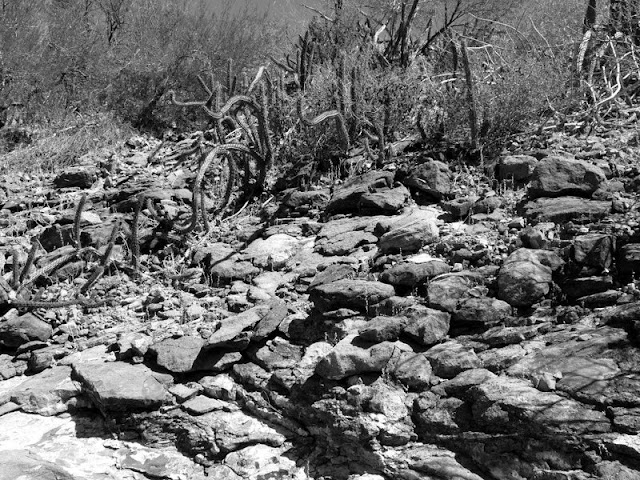 I started to get worried.  I looked way up on the ridge, along the road there, where I expected to see her, a dusty figure trudging uphill, white shorts flashing in the light. Nada. 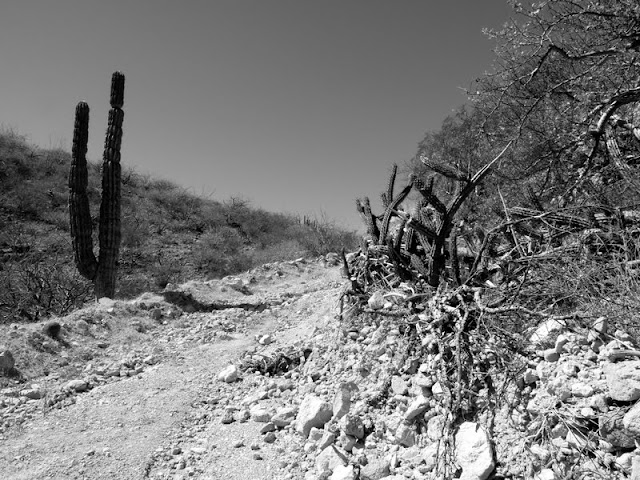 I used the camera to zoom in on spots at one end of the beach or another.  Yes, a flash of white, a flutter.  She's waving to me!

Oops, no.  Pelicans, not Marike. 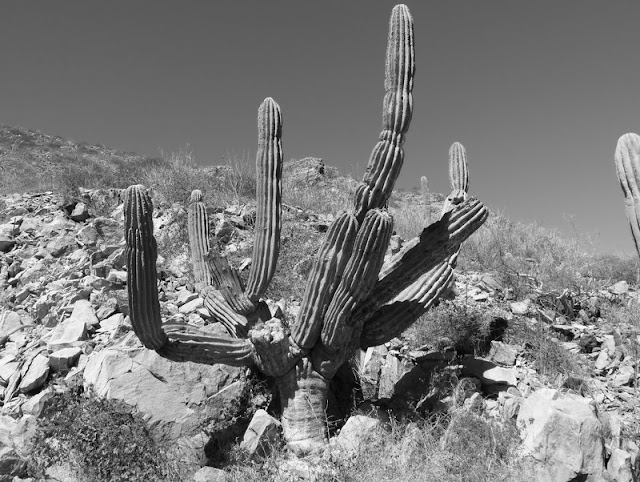 Where was she?  How could she have disappeared? How could I have lost her?  What if she were on the trail somewhere and met up with a rattler or tripped and fell? What if that happened to me while I was looking for her?  Or what if I got lost? What if........? 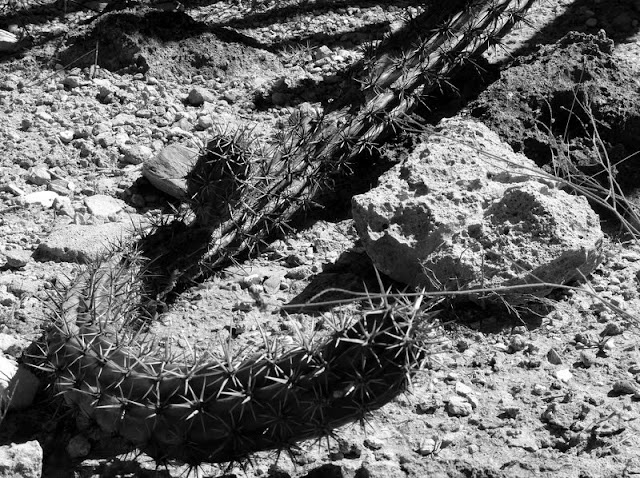 Finally, I regained my reason and began to look for signs of the trail BEFORE the beach, between the brackish water and the last line of hills.  The beach, I reasoned, was what had distracted me; I'd been too seduced by the sea and that floppy hat, so that I missed both trail and girl. 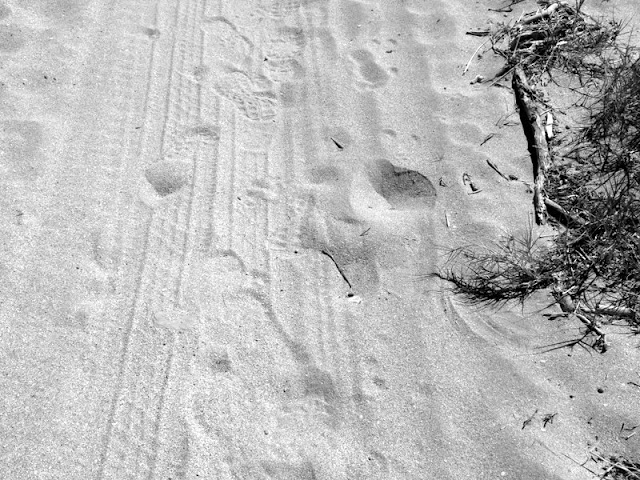 Yes, there it was!  And there were her tracks.  I followed them along, through a fence, and soon there she was, coming back from the top of the hill. Turns out she'd seen me on the beach. Or, thought she'd seen me, but it was a mer-lady built of driftwood.  Then she did see me--I was looking right at her, she said--and she motioned for me to come. But I never saw that. 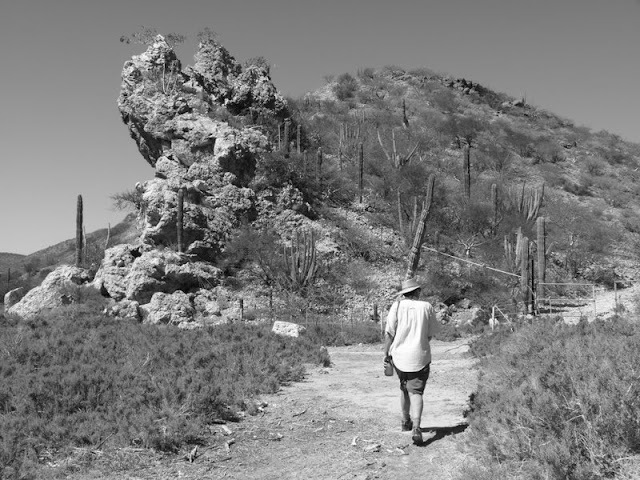 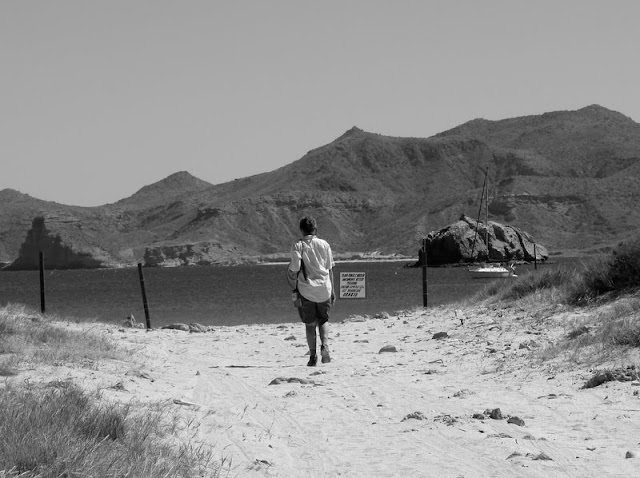 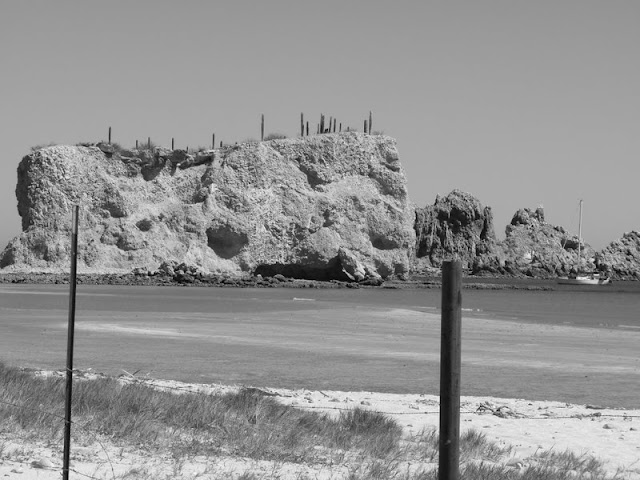 Still, when we finally did meet up (I stowed my worry immediately, feeling silly, feeling embarrassed) that yicchy green gatorade she was carrying was pretty delicious.... 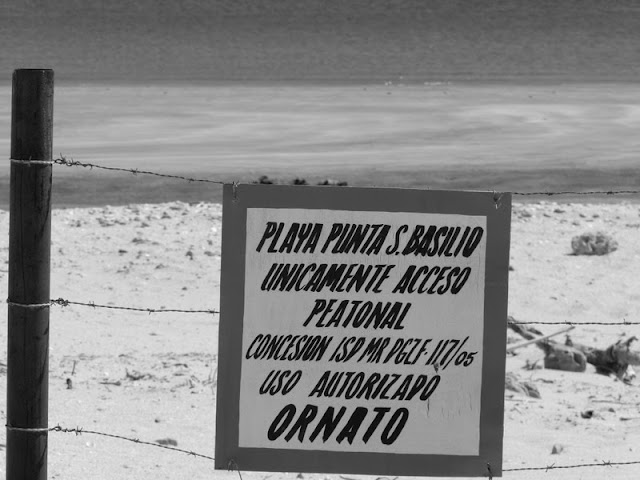