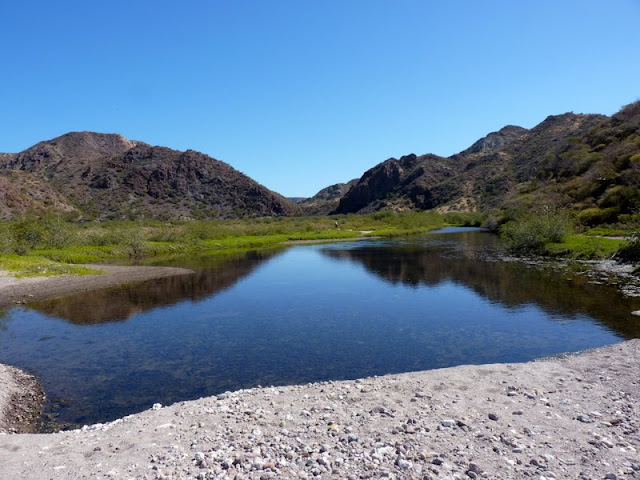 Today we are in Ballandra Cove on Isla Carmen, one of the Marine Park Islands off of Loreto, Baja California Sur.  We can see the lights of Loreto at night to the west, strung along the sea, below the steep mountains of the Sierra de la Giganta. 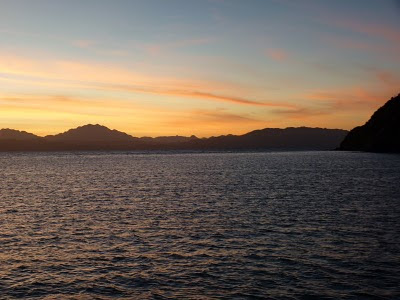 Ballandra is enclosed on three sides by mountains covered in cacti and desert vegetation; the cove is really a steep underwater canyon, with reefs formed of lava flow from an ancient volcano. Sea birds colonize the cliffs--the gulls trade commentaries that form a sort of continuous laugh track to life in the cove, and boobies and pelicans swoop through repeatedly. A shack, a rough sort of lean-to for the fishermen sits at one end of the beach, and behind that is a pool of brackish water, all that remains, we discovered today, of what must be a pretty fierce run of water during the rainy season. 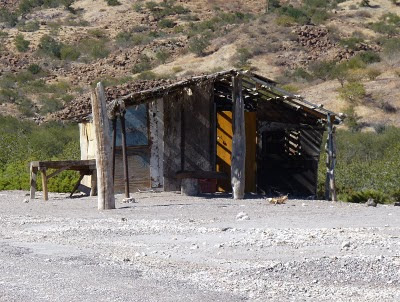 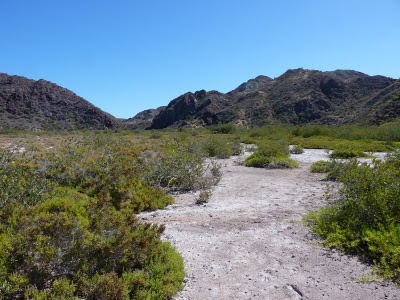 We've meant to hike up that arroyo seco for years now--we saw on a chart that you can hike all the way across the island to Salinas--once a great saltworks known worldwide, but now a ghost-town/museum with a caretaker.  This year, the days are cool enough to bear such long inland walks, so this morning we set out with our hiking boots and straw hats and sunglasses and each with her liter of gatorade.  Marike rowed us to the beach, we hauled the dinghy above the tide line and tied her painter to a bush and skirted the muddy watering hole, crossing salty flats towards a narrow gap between the mountains. 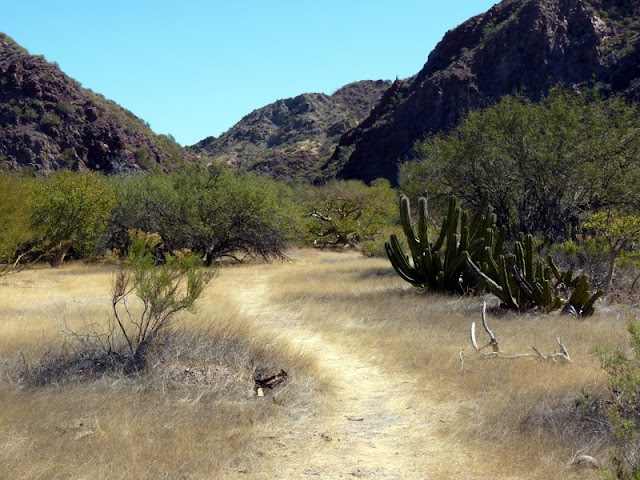 A grassy trail led to the dry river bed, which was sandy, then gravelly, then, in its upper reaches--well the reaches as far as we got--filled with stones and water-carved rocks and steep banks and clusters of deadwood and roots and plants wound round one another when water once rushed past. 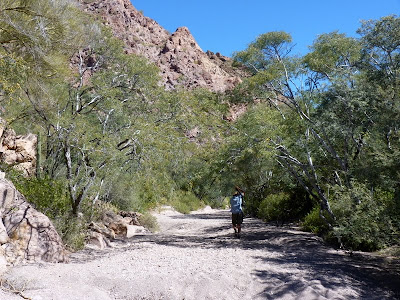 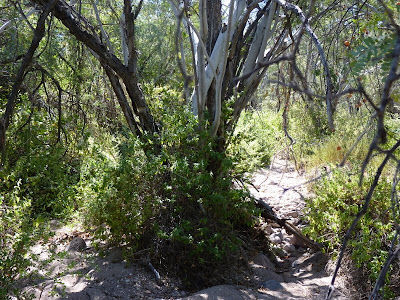 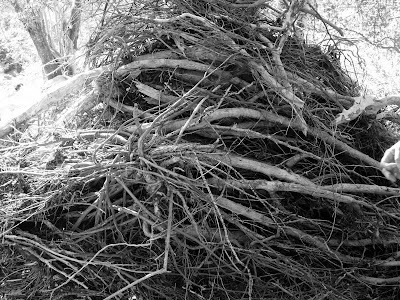 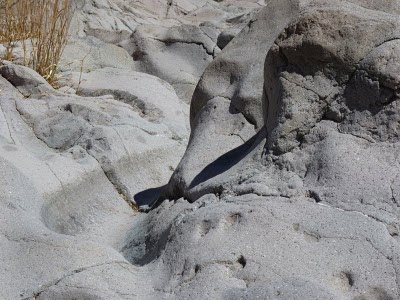 As we walked I remembered--or half remembered --a fragment of one of poet Jose Marti's Versos Sencillos: " El arroyo de la sierra/Me complace más que el mar"--loosely translated, "a mountain stream pleases me more than the sea."  (While we'd be hard pressed here, of all places, to agree utterly, the line is beautiful, as is the sentiment it expresses within the metaphorics of Marti's verse, where the line completes a thought which begins "Con los pobres de la tierra/ Quiero yo mi suerte echar // With the poor of the earth, I cast my lot."  In this arroyo, this wrinkle in the earth, I find my destiny, which is at once small, common and uncommon.) 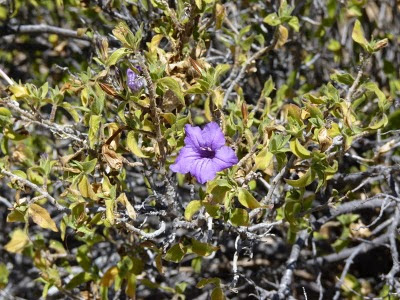 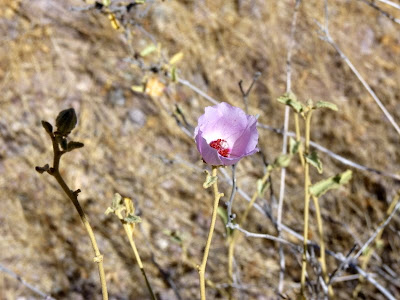 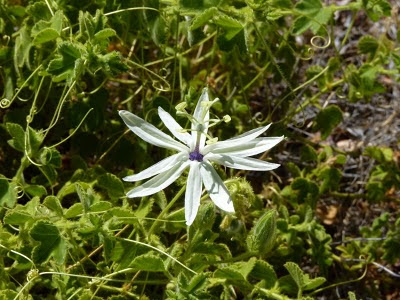 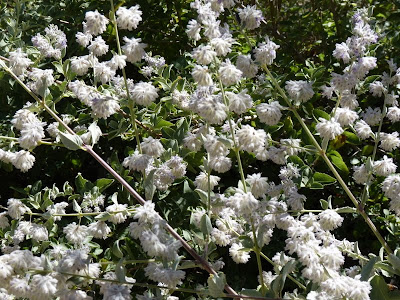 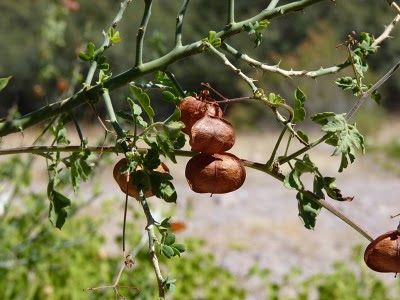 Plants all around us were in bloom and the scent was haunting, crushing--tiny purple flowers like violets, pale pink bells growing out of grasses, complex white flowers, rather like a passion flower with prominent stamens and a powerful attractiveness to bees--at first these clustered on low bushes, but soon the bushes twined with trees and became the size of trees....Something like spirea with cloying bundles of white blossoms with tiny purple tips, and flitting all around, butterflies of every colour and description... 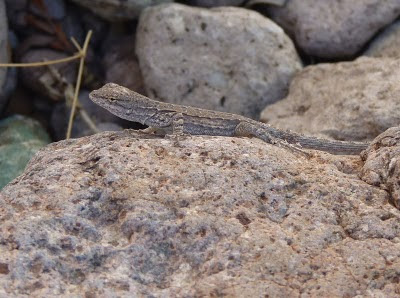 Lezartijas skittered under every bush or ran ahead of us as we hiked along.  The arroyo wound through the narrow pass, and birds sang and called and flitted by--Marike even saw a cardinal on our return.  We also saw hummingbirds and dove-like birds--all kinds of creatures we did not know how to identify. 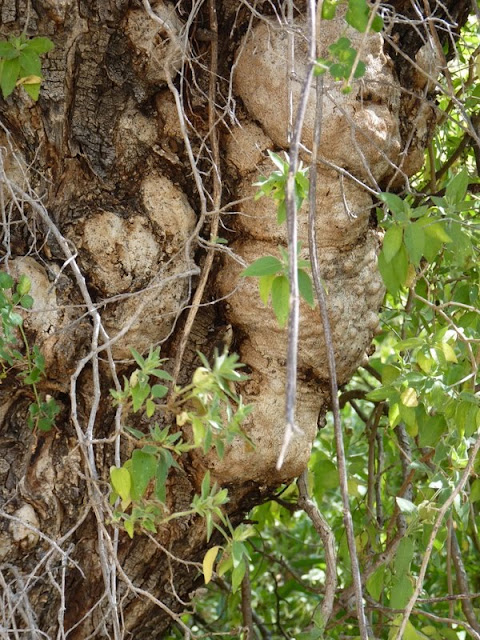 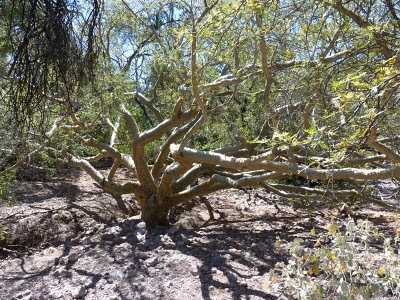 At times, the river bed narrowed and we clambered over stones and roots; trees grew alongside the banks, and in the shade, we could feel the coolness of nearby water, even smell it, but we never saw it.  Our boots filled with stones and sand; we had to stop several times to shake them out.  And above us, on the mountains and along the higher banks, cacti grew, along with yellowed and dying grasses.  We walked beneath red cliffs, stopped below trees that smelled like juniper, carry red-purple fruits and light yellow peeling bark.  Marike crushed and rolled some of the bark in her hands--hours later her fingers still smelled like bitter oranges. 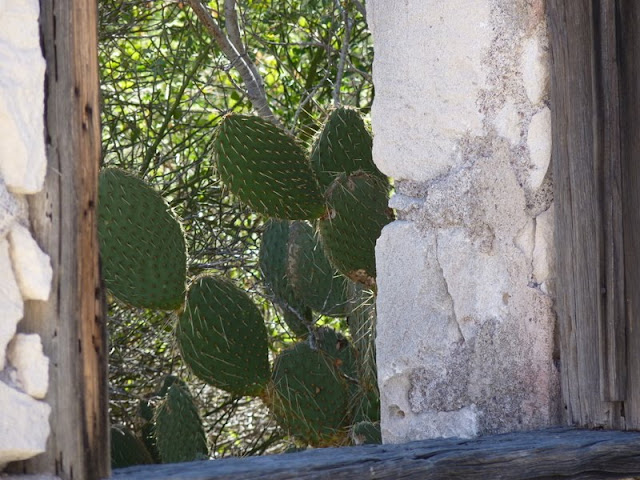 At one point, above the bank of the riverbed, we came across a building of handhewn stone.  A few rotten roof beams had fallen into a chasm in the centre of the building.  Beside it was a rounded concrete cistern of some sort, with a trough low enough for cattle or horses to drink, and a single chain, anchored to the ground.  Marike thought the building was perhaps the remains of a pumping station of some sort, the ensemble what was left of some effort to keep livestock on the island. 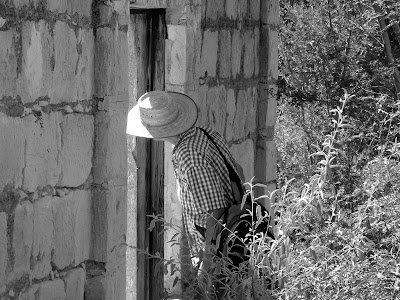 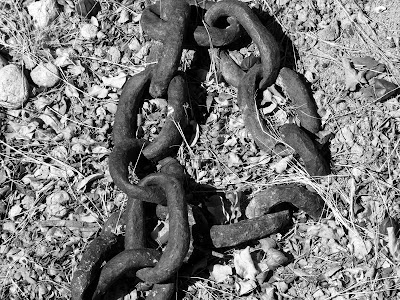 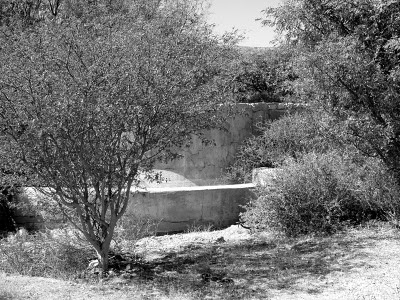 We walked up the riverbed for more than three hours, climbing higher into the mountains, and over steeper stones, following switchbacks as the water carved a shallow canyon in the rock.  Finally, stopping for a sip of gatorade, we decided to turn around, since another hour forward would also mean another hour back.  Altogether, we walked for nearly six hours in the heat of the sun. 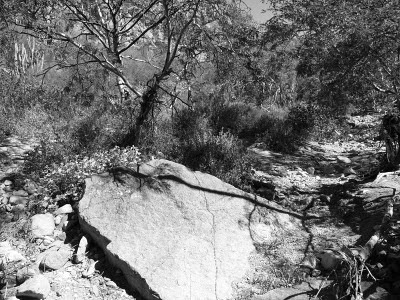 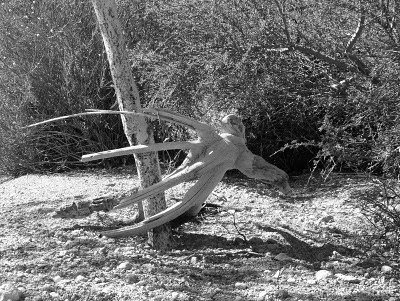 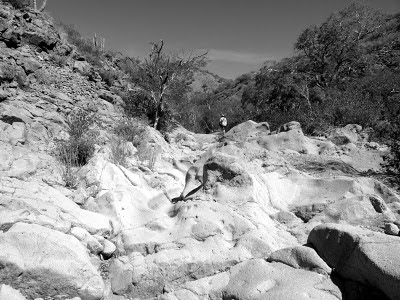 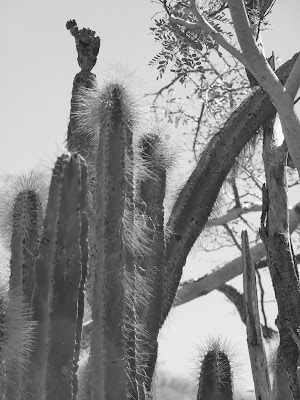 We never made it to Salinas, but we discovered a whole world in these mountains back of the sea, these desert mountains that, when we first looked up at them years ago, appeared like so much "disorganized dirt" as Marike used to say.  We're scratched up by our encounters with desert thorns and spines (everything in this environment must be able to defend itself and its water-supply--I was carrying burrs so needle-ish they drew blood, and narrowly avoided one half the size of my knee) but we are deliriously happy, utterly transported by sound and scent and sight. 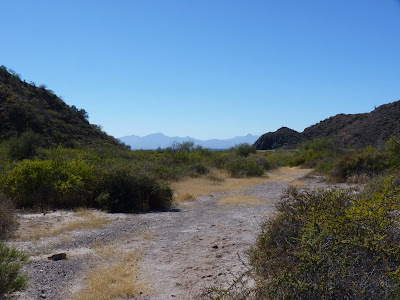 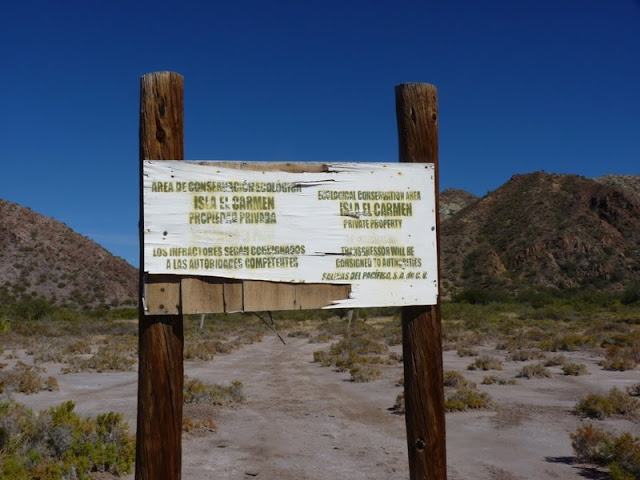 For more photos of this walk see http://picasaweb.google.ca/karin.cope/WeTryToWalkToSalinasInARiverbed?feat=directlink

Adapted by Spanish composer, Julián Orbón, who lived in Cuba between 1940 and 1960 to the popular early twentieth-century tune "Guantamera", these famous lines from Marti's 1891 versos have since become the best known version of "Guantanamera." See http://en.wikipedia.org/wiki/Guantanamera.

For a version of this song contained Marti's words and performed by Compay Segundo, see
http://www.youtube.com/watch?v=bJ4NOXz3gjA
Posted by Karin Cope at 11:39 AM