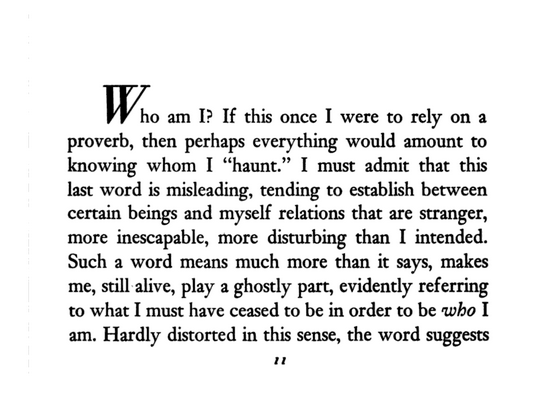 If you block out most of the words on the famous first page of Breton's Nadja, you get a question transposed into a statement:

All of Nadja could be summed up in this phrase, Breton's ode to himself, or to the power to drive an ill woman mad. --At least, that's one possible reading of the story.

One is not inclined to imagine that such a reading is incorrect when face to face with the last image in the book, or rather, its revision: 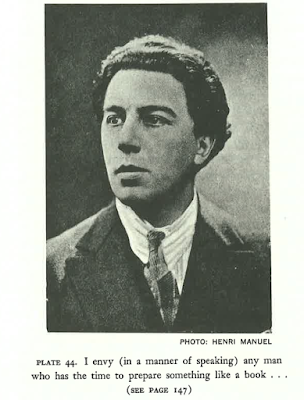 In the caption to this self-portrait, Breton writes as one who envies himself--and in this way becomes, at once, himself and himself-as-someone else, Nadja, a man of record, a public figure, a writer.

No wonder it also always feels like a trick. "I must admit this last word is misleading." And so, too, those that precede it.

I should explain what has occasioned this short excursus on Breton, yet another one, for I've written about him--and Nadja--here before, although arguably stopped just short of the insight that the exercise of literally blocking out bits of his text finally offered me--that when Breton writes, he writes for and of himself; he haunts himself; every other is just a foil. You can judge for yourself: see http://visiblepoetry.blogspot.ca/2012/03/something-wrong-notes-on-bretons-nadja.html.

This time, which is to say, yesterday, I was thinking about a course that I will teach again in the fall, something I've called Strategic Fictions.  The course is designed to expose visual artists who want to make use of fiction in their work to the techniques of fiction as writers think about them, as well as to a number of contemporary artists and artworks (sometimes called "Superfictions") that make use of various aspects of fiction: for example, Sophie Calle, Joan Fontcuberta, Iris Haeussler, Janet Cardiff and George Bures Miller, Emily Vey Duke and Cooper Battersby, The Museum of Jurassic Technology, and so on.

I have previously, with many misgivings, made use of Nadja as precursor text in this course, as a way of visibly linking the strategies of the artists we consider back to various modernist exercises, including (auto)biography-as-illustrated-novel (Calle, Haeussler, Fontcuberta, Cardiff and Miller and Duke and Battersby all enact variations on this theme). In fact, my previous piece on Breton and Nadja, "'Something Wrong': Women Who Crash," began as an effort to engage the image-using and citational strategies of Nadja to new ends, and was first drafted as a lecture for the Strategic Fictions class.

Yesterday, however, I was wondering if I could engage my students in a more direct project of handling Breton's text.  I'd been looking at and thinking about poet Mary Ruefle's "erasure" books--works where she takes an earlier text and blocks out sections of it to make a new text.  See for example, a page from the poem/book, A Little White Shadow, itself constructed from a novella published by Emily Malbone Morgan in 1889 also entitled A Little White Shadow: 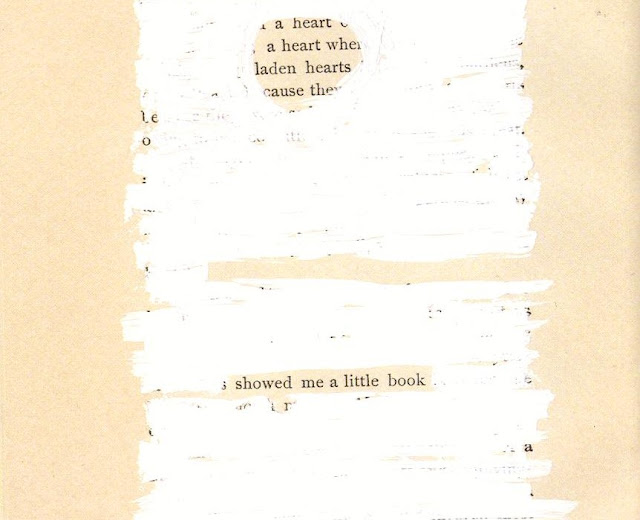 Such works-by-erasure are common in poetry, especially contemporary poetry, and repeatedly and knowingly give the lie to various claims to "originality." Poets are constantly writing in the style of, or "after" various others by borrowing from and reworking earlier poetry, often tongue-in-cheek, or building poems from excision, concision and mistranslation.  A cento is, for example, a poem entirely composed from fragments found elsewhere, heretical verse, taking one sort of text and making it say something else. This form, named and exercised by Roman poets of the second or third century, is all about the generative power of mistakes or, more particularly, the capacity of heretics to re-author the Gospels simply by citing select bits of them.  The Latin word harks back to the Greek verb kentron, "to plant slips of trees," as well as, or so the dictionary and various commentators claim, to a later Greek formation, kentrone, or "patchwork garment."  We are all born from someone and somewhere else; little or nothing is new.

Likewise, Canadian poet Gregory Betts has made much of what he calls "plunderverse"; as with Ruefle's work, he takes a source text and, preserving the order of the words and letters, strikes out until the old text speaks differently, anew.  "We are born into language but a language not our own," Betts writes.  "We can only speak a language not our own." (See Betts' Plunderverse Manifesto here: http://www.ottawater.com/poetics/poetics05/05betts.html and a review of his aptly named The Others Raisd in Me, a work of plunderverse here: http://aarontucker.ca/reviews/the-others-raisd-in-me-a-plunderverse-project-gregory-betts/).

Similarly, artist Tom Phillips makes use of such dadaist-become-surrealist technique in his 1987 A Humument: A Treated Victorian Novel, one page of which is reproduced here: 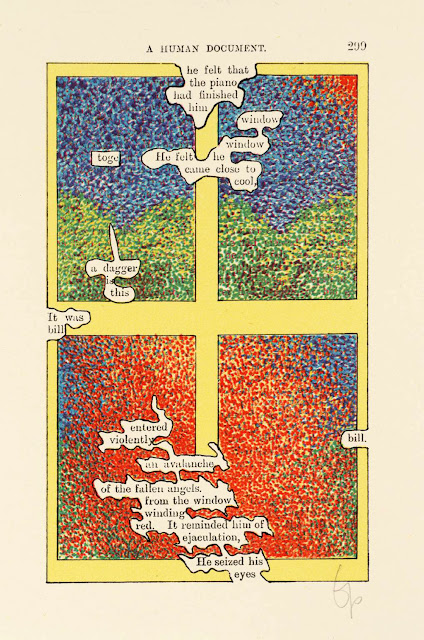 Such contemporary poetic or painterly projects are, for the most part, descendants of techniques like those spelled out in Tristan Tzara's 1920 "Dada Manifesto on Feeble and Bitter Love," where he instructs readers to cut words from the newspaper, put them in a bag, shake, and pull them out, one by one, writing them down in the order in which they appear. The resulting "poem will resemble you," Tzara promises.  Still another example may be found in the recyclings of Max Ernst's "collage-novels" of the 1930s, for example La femme 100 tetes or Une semaine de bonte, where Ernst combines drawings on Victorian illustrations into long wordless and surreal tales--as in this weird and textured plate from Une semaine de bonte/ A week of kindness: 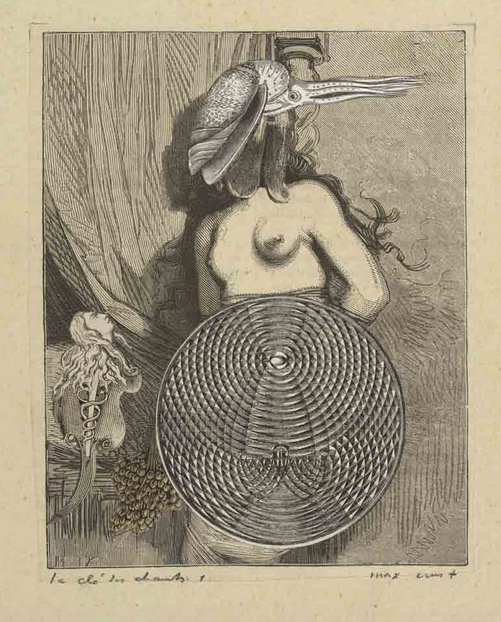 With such examples on my mind then, and wondering about possible exercises I might assign to students grappling with Nadja for the first time (or, as also happens, falling in or out of love with it--what is it about the power of the surrealists to command us with their mad loves and hates?), I opened my copy of Nadja, trans., Richard Howard  ***with this phrase, "trans. Richard Howard," I have been echoing or writing "after" Frank O'Hara's wonderful and breathless poem "The Day Lady Died"*** and began mentally blocking out text, rewriting the first page, and thereby writing a short poem from a novel--if this little exercise can be called a poem. Or perhaps all of these words and every one of these citations is the poem, which can only invite further plunder.

But wait; there is more.

One final note. As I am finishing this text, I open my copy of Breton's L'Amour fou, a(nother) book in his trilogy of novels dedicated to the unfolding of unexpected encounters and coincidences. A ticket falls out on which is printed the following command: "Please read carefully." I do. Or rather, I read that line several times, since I don't have my reading glasses with me, and what follows it is printed in type so painfully small that it devolves into wavering black squiggles, a drawing perhaps, another block of excised text. Definitely not words.

Everything repeats itself; nothing is new; what is the difference between altering and misreading, and simply not reading? This is not a minor question in an era when Donald Trump is touted as a viable US presidential candidate.

Oddly enough, I have been reading this morning the text of lecture by Mary Ruefle entitled "Someone Reading a Book is a Sign of Order in the World." There she recounts one day when she was in her forties, "an ordinary day, neither sunny nor overcast," when she could no longer read; the words would simply no longer compose themselves in any sort of sensible order. Ruefle writes:

[T]he words that existed so I might read them sailed away, and I was stranded on a quay while everything I loved was leaving. And then it was I who was leaving: a terror seized me and took me so high up in its talons that I was looking helplessly down on a tiny, unrecognizable city, a city I had loved and lived in but would never see again."

She explains that really, she needed reading glasses, but "before I knew that, I was far far away." The train had left the station. Everything was fraudulent; the landscape had shifted; her sense of reading as some sort of orderly practice in the world had come completely undone.

But in fact, although we usually don't recognize it, this is where we are when we are reading--on edge, overtaken, helplessly hopelessly behind. We've missed the train; we're on the wrong train, or simply find that where we thought we were is elsewhere. Or nowhere. There is no there there (says Gertrude Stein in the 1930s as she is touring the United States).

Please read carefully.
We do. And we cannot.
Ever.

And so we begin again.

We sit and we read and then we set out...reaching town as evening [begins] to fall.*

*These are last words of the English translation of W.G. Sebald's Austerlitz, a book about reading, lost memory, extirpation, transportation and death.

Reading. Writing.
We think these activities will save us, but really they carry us ever closer to death--even as they put off--still another hour!-- the arrival of that day.

Maybe this piece should have been called "Someone reading a book is a sign of disorder in the world."
Posted by Karin Cope at 6:28 PM