On Works in Progress 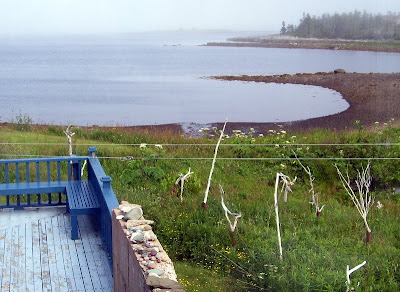 I. The Futility of Plans

Fog, then it clears, then cloud, and always high tide. Or is it that I'm getting up an hour later each day? It is hot and the bugs are fierce--we wait longingly for the wind to rise.

Last night after supper Marike and I walked up the road. Our neighbours, Phil and Susan, were sitting on their porch with the two dogs, watching dusk slip into the cove. A loon crying over by Port Dufferin. No fireflies, just blackflies.

They have a new pet, a little black duck their son Mitchell rescued his last day lobster fishing. Mother and young had all gotten split up and seagulls were carrying away the ducklings. Mitchell found this one all alone near a rocky island and brought it home. Phillip tucks it in the neck of his shirt to keep it warm; it chirps and nestles against his chest. Once it warms up it begins to preen. They feed it mussels and periwinkles live, just cracked from their shells and dropped in a small container of water. The duck swallows greedily then falls into a stupor. It is still covered in down, has short stubby black wings and huge webbed feet. It can run quickly and paddles about on the floor chirping loudly when it's hungry.

They have two cages for the duck, one indoors and one outdoors. Both contain little duck "ponds"--an old bread pan filled with water does the trick in the indoor cage.

Booboo the dachshund has fallen in love with this wondrous little creature--the only one in the house as close to the ground as she is. (The other dog, Nelson, is a handsome and utterly enormous Shepherd, far larger than I am.) Booboo cuddles the duck in her bed and chases off the cat. No one is quite sure what the cat will do so this is a good thing. Everyone guards the duck so vigilantly that the cat appears to be afraid of the duck now. Usually called Memphis, this spring the cat has been on such a killing spree--birds, mice, rabbits, squirrels, moles--the family has taken to calling him "Lector."

When the duck pooped in the bed, Booboo set about trying to tidy things up, nosing over the cushion--and the duck--so that the poop was out of sight. This made Susan, who's back to changing diapers with her grandson, laugh. It never ends Booboo I'm telling you, she says.

Five times a day the duck must be fed. Susan heads out onto the bug-infested back porch and wrestles with periwinkles for half an hour, trying to crack out ten little bits of food. Then there's the matter of collecting duck's meals every day--Phil and Sue crawl about on the beach or head to the islands to pick periwinkles from the bladderwrack.

What do ducks eat in the wild, we ask, pretty sure they don't crack periwinkle shells.

I don't know, Mama Duck Phillip says. Mussels and periwinkles are all we have. He says this while he peels a shrimp and pops it into his own mouth. This disjunction between word and deed makes us laugh. But the duck won't eat frozen shrimp--they've already tried--it's live seafood or nothing. Concentrated cholesterol.

Phillip muses, as he watches over the furry, feathered bit of his chaotic brood: We thought we'd be getting away now and then now that our kids are grown up and have moved out. But here we are, in this recession, no demand for any of our businesses, with a house full of creatures they've brought home.

Life is never what you think it will be, he says. It goes in its own direction, no matter what you plan for. 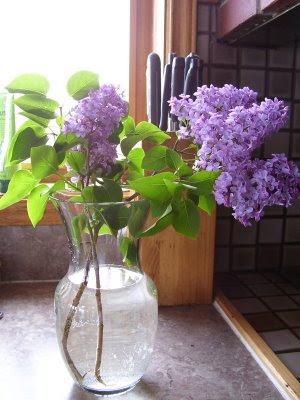 II. Writing Poetry, or "another day of humiliations"

This morning I started to read Robert Lowell's Collected Poems (2003). My pleasure in what he writes--the soundness of his lines--startles me. I had not remembered this. The rhymed enjambed lines of his first poems really work; "Colloquy at Black Rock" with its repeated mud mud mud is marvelous. (Black Rock Connecticut, is where Lowell served his parole, after doing time in federal prison in Danbury, Connecticut for refusing to be drafted into the military in 1943--Quaker roots showing like skeletal remains through his "fiery" conversion to Roman Catholicism in 1940-41.)

I like some of the details too, from a brief introductory memoir by Frank Bidart, one of the editors of the collection. Lowell, by his own account spent "hundreds and hundreds of hours shaping, extending and changing....staring, crossing out, writing in, crossing out what was written in, again and again... In time, the fragmentary and scattered limbs become by a wild extended figure of speech, something living...a person" ("After Enjoying Six or Seven Essays on Me" Salmagundi (Spring 1977)). Such sorting of fragments can, however, be very discouraging in its middle and muddling stages. Bidart recounts that after a long day of work Lowell would sometimes say, "well it's been another day of humiliations" (vii), by which he meant another day of facing, wrestling with and never besting the problems thrown up by his own projects.

But there was no "end," no perfect revision he was striving for, just solutions to one conundrum or another. And where two versions with merit persisted or were published (for he mined and revised his own--and others'--work all his life), Lowell said, not this or that one is best, but "they both exist."

Lowell was likewise generous with his readers; for both poet and readers: "a poem changes with each inspection. Variablity is its public existence"("After Enjoying"). Nothing is static even when it is fixed on the page. As he remarks on the mutability of the past, of memory, (not knowing, surely, that he was writing his last essay and would be dead of heart failure in September 1977), "from year to year things remembered from the past change almost more than the present" ("After Enjoying").

A man of revisions but against the infinitely perfectible ideal--now that's wonderful! I love all of his "old china doorknobs," those "sad/slight useless things" his verses collect.

Here's how at one point he describes his effort to make poetry:

Time to grub up and junk the year's
output, a dead wood of dry verse:
dim confession, coy revelation,
liftings, listless self-imitation,
whole days when I could hardly speak
came plumming home unshaven, weak
and willing to read anyone
things done before and better done.

Much of what I've cited here was "junked" verse from the first version of "Waking Early Sunday Morning," published in the New York Review of Books in 1965. (The second, better-known version opens Lowell's 1967 collection, Near the Ocean.) All the same, it still exists, and expresses well, not leaving out the agony, the struggle to undertake aesthetic acts, the moral, psychological, editorial, even physical wrangle behind each line.

Today ("willing to read anyone") I let him say it for me.

Images
half fog over Quoddy Bay
lilacs blooming in the kitchen
Posted by Karin Cope at 9:19 AM