Crossing the Sea of Cortez

20 May 2009
Sea of Cortez, Northern Crossing from Bahia Concepcion to San Carlos 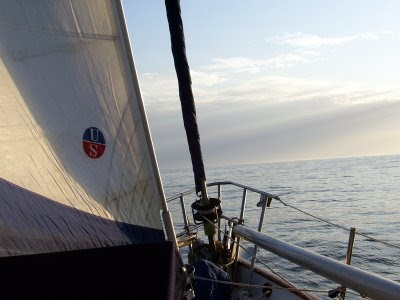 There are two typical "highways" or "crossing points" for sailors traversing the Sea of Cortez between mainland Mexico and the Baja Peninsula: one, between San Carlos or Guaymas, on the mainland side, and Bahia Concepcion on the Baja side, is known as the "northern Crossing;" the other, between La Paz and Mazatlan or other nearby points is known, naturally, as the "southern crossing." These transit points bear no markers, of course; how and where one crosses is always a matter of individual selection. But because the crossing points tend to make for a shorter or easier journey, their ends become habitual meeting places, crossroads; it matters too that one can often get a fairly accurate weather forecast for these crossings--not having to piece it together all yourself can save quite a bit of time and effort.

Our goal was the northern crossing, a 75-80 mile run across the sea from the Baja Peninsula to mainland, where we would clean, haul and lay up the boat for another season. The run is long enough that you are likely to encounter a number of changing conditions, but short enough to make the distance in single long day. It's often, alas, very long for Marike, because something about the northern crossing seems always to make me sick, so until I'm smart enough to take Gravol, and it kicks in, I can be quite useless--something that has not been the case on longer, more southerly passages.

This day, we were up at 5am, hauled the anchor and were off--in the wake of Honu, the boat from Honolulu we'd waved at in the anchorage the night before. We'd discussed the weather and the crossing briefly. It seemed they'd waited for us, so once we were underway, we called them on the radio.

Susan answered and we all quickly realized, hey! we have two women skippers here! Wow! Susan is a marine biologist and writer and has sailed from Hawaii to Australia; her husband Craig, a cyclist, sailor and ER physician had joined her for this trip back across the Sea. Their boat, a speedy Wauquiez 37, is named Honu, a local name for a sea turtle native to Hawaii and other parts of the Pacific.

Susan asked us if we'd take some pictures of Honu underway, since they'd never had any, so we did and here she is, biting into the waves: 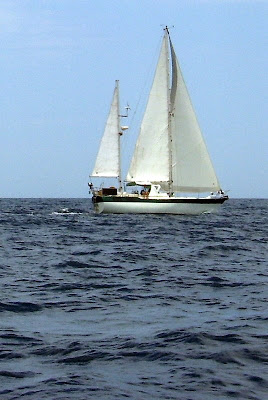 In exchange--and with a much better camera!--Susan photographed Quoddy's Run underway--all sails up, and with a reef in the main. 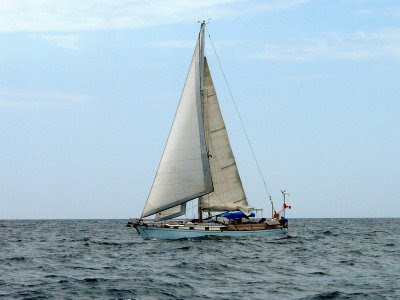 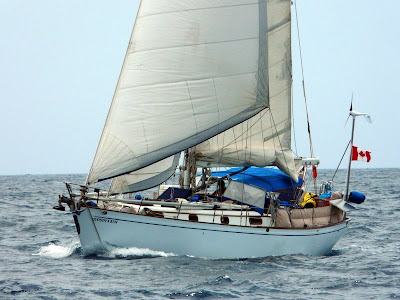 It was a fast crossing: we made it, and were settled at anchor in San Carlos in under 15 hours, just before dark. The winds were surprisingly wonderful (none had really been predicted) and they lasted all day into the late afternoon. Altogether, we logged more than 10 hours at sail, much of it moving at nearly 7 knots.

Seven knots may not sound like much, particularly compared to ordinary highway or air speeds, but it is about as fast as a boat the length (44 feet--37 or 38 feet on the water) and weight (17 tons--yes, that's right, about 35,000 pounds--that's why sailboats, with their leaded keels are called "displacement boats") of Quoddy's Run can physically travel. I shot some video of the crossing--tough to do because we were heeled over and everything was moving quite a bit. As you will see, seven knots feels very fast; it seems as if we are flying!!!

On the crossing we saw at least a dozen whales, probably fin whales, Susan says, including a mother and calf we think--two whales feeding on the surface and diving and blowing, very close together. Several times we saw dorado jumping--these large fish have boxy heads and are neon green and yellow with red markings. They are much sought after as game fish--they taste utterly delicious--but it's hard to imagine killing them when you see them leaping like a slash of rainbow through the waves. We also saw many flying fish--they scull the air and look like flocks of snow buntings skimming just above the surface of the waves, then a shark and several fish that appear to walk on water. We don't know what they're called here--we asked Susan and she didn't know either; "I'm new at identifying things in the Sea of Cortez" she said. In El Salvador, for obvious reasons, everyone called those walking fish "Jesus fish."

Finally by afternoon, the mainland was in sight, then the wonderful landmark that towers over the Bahia San Carlos, the mountain called Tetas de Cabra or "Goat's Teats." 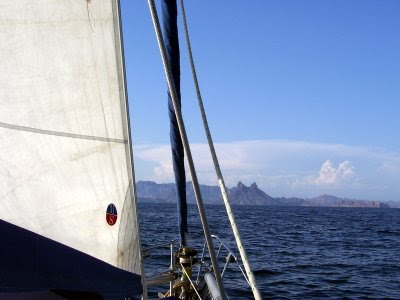 We were anchored by dark, ate and fell into bed--only to be wakened, before midnight, by lightening and thunder directly overhead, then rain. It was the end of "fine clear weather" after all it seemed: the rainy season (such as it is in the Sonora Desert) had apparently begun. We battened down the hatches for an hour or so.

For Susan Scott's writings on the Baja see http://www.susanscott.net/OceanWatch2009/OceanWatch-09.htm--most entries from mid-January to early June 2009 are about ocean life in the Sea of Cortez.