On Brittle Ice: A Week of Winter Weather 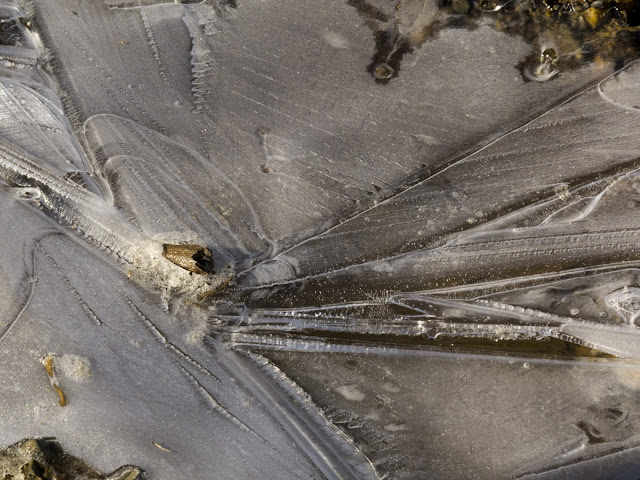 Clouds always tell a true story, but one which is difficult to read.
Ralph Abercromby, "Suggestions for an International Nomenclature of Clouds," 1887.

Sun today, after snow and bluster and rain yesterday.  It must be warm because the pond is slick and watery, though still frozen, snapping and groaning as the ice shifts. Blue sky; blue sea; blue ice. Frozen water pools in the dead grass, glitters in the sun. The ground is solid now, like rock, and won't absorb the rain. 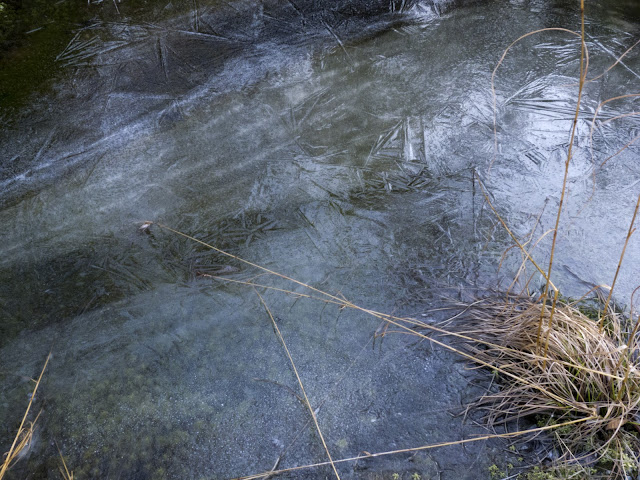 The sky is clear blue this morning, the light golden; a scattering of snow sparkles on the porch railings and floor, and swirls in strange looping patterns across the blue ice of the pond. Every contour is sharp, crisp, defined. At -11 it is cold enough that moisture has dropped from the air, and along with it, all haze. Another day of such cold and near stillness of wind and the sea will begin to freeze. Ducks swim in the shallows, eiders I think, but I would have to look through the binoculars to be sure.  Out by the islands smoke rises from the sea, warmer water lifting into cooler air.  A swath of brittle salt-ice limns the beach where the tide has pulled back. 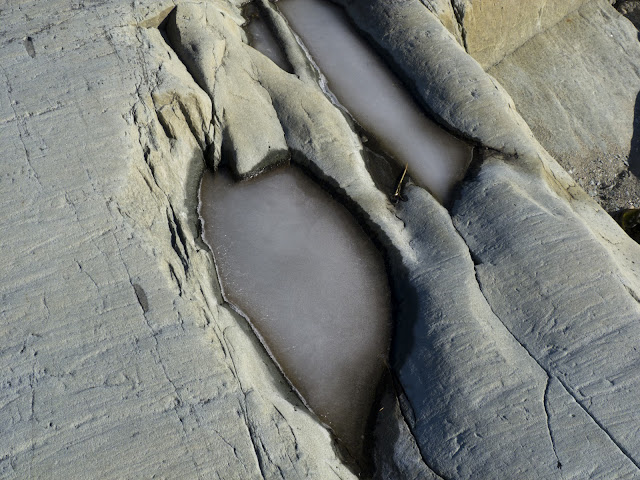 A steady rain falls on the ice, the windows, the streets. Wind in the trees, standing water everywhere, the ice rotting and guttering, hiss of tires on pavement, darkness. A twilight day. A day to be home, to stay home, to huddle in bed beneath the eiderdown. Blot out the world. But I am not at home; I am here, in Halifax, and have to trudge to work soon. Cold feet, wet feet and a blown out umbrella--the joys of the day.

Rain. Rain. I listen to Bach's cello sonatas. The wind picks up, flings rain like pebbles at the windows. Time to get up and go now. 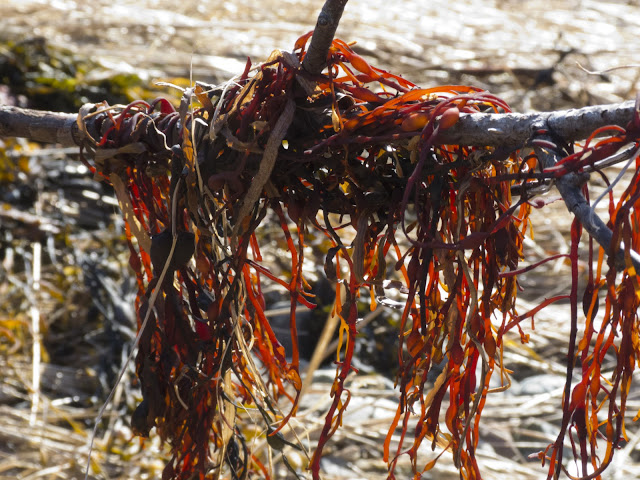 Home again in woodsmoke and slush and yellow grass and damp earth and singing birds. High tide, and masses of seaweed are tossed up on the island, on the cove shore; they glow, rubescent, beneath grey streaky skies.  Lines of light above the islands. A slight wind. Rain.

Sudden angle of near sun so that the porch floor begins to glisten, the water goes silver and the edges of things sharpen. And then it fades. A brief break of blue overhead. The last one. Seas nearly flat calm, just the motion of the tide rolling in, rippling the glassy surface. That movement always makes me feel as if the earth is breathing, as if the sea is the lung of the world. 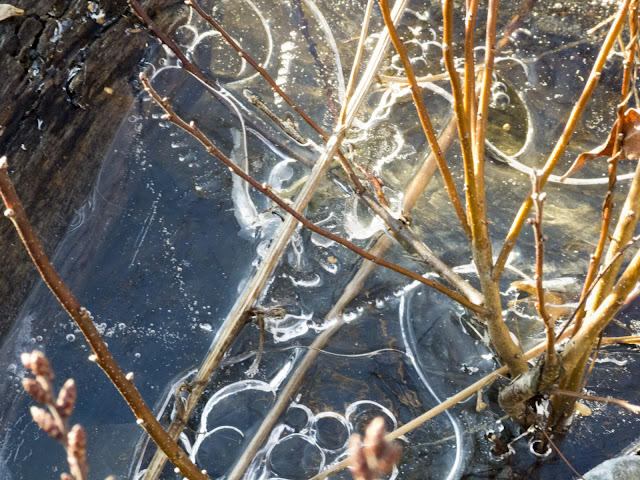 Blue light of a coming storm. Grey clouds, dull sea, a narrow streak of light across the sky to the south. Frozen pond. Suddenly sun flashes through thinning cloud and the sea glistens gold, a beaten brass pan. 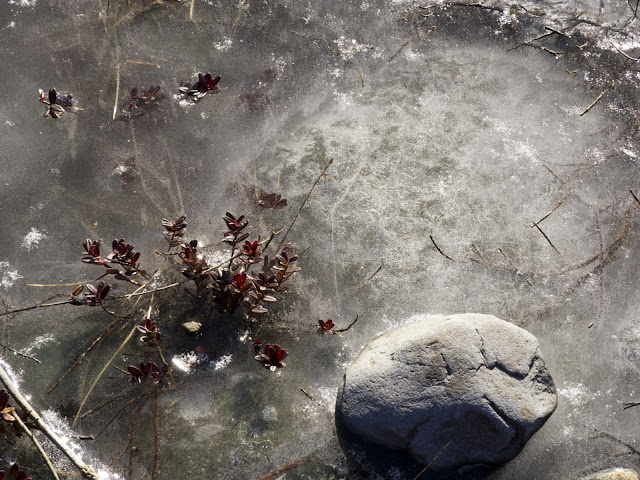 A cold morning. The sea has frozen again nearly all the way to islands and shattered white sheets of ice, like glass, lie crumpled on the beaches. The sun is a pale white orb behind pale clouds; the pond and sea, too, are a whitened grey.  Now is our descent into a colourless world.  A storm is in the offing: snow, then rain then ice, oh joy.  I am glad I do not have to come or go to the city today.

All night an eerie stillness as we wait for the wind to begin to sigh from afar. 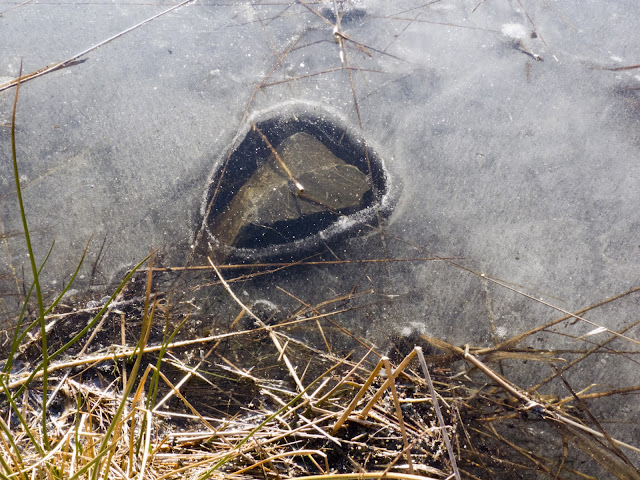 Ralph Abercromby's comments on clouds are taken from Richard Hamblyn, The Invention of Clouds: How an Amateur Meteorologist Forged the Language of the Skies. London: Picador, 2002, p. 253.
Posted by Karin Cope at 10:05 AM