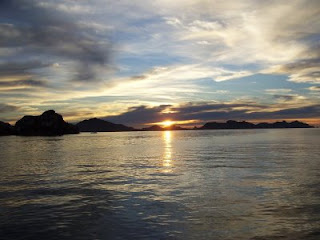 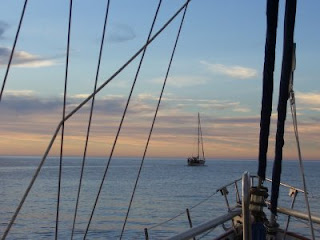 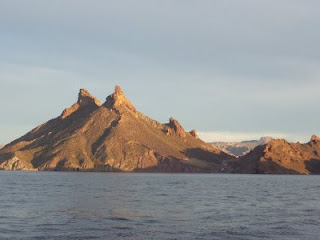 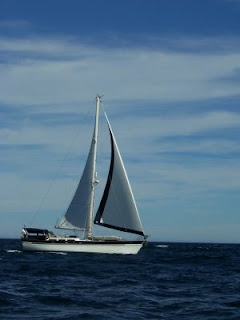 Life really isn't so bad--these photos were from my winter break, in February.

Some days really are like this--blue sea, enough wind to sail, warm light. The Tetas de Cabra (Goat's Teats) rising above the harbour. Dolphins swimming out to meet you. We set out at dawn from San Carlos, which is in the state of Sonora, on the mainland side of Mexico. We were making what is known as "the northern crossing"--the approximately 70-85 mile run across the Sea of Cortez from the Guaymas area to Bahia Concepcion or points south.

You'd never know I was terribly sick this whole day--poor Marike single-handed on the crossing for nearly 15 hours, while I slept and gathered enough energy to help anchor in the dark, not long before midnight, in San Juanico, on the Baja side of the Sea of Cortez. That's where the pelican sketches (Mexico on My Mind II) were made.

We were sailing alongside our friends Paul Seamon and Dee Vadnais--that's their lovely Christina, Blue Pteron, above. Dee is a painter; she's been extremely generous with Marike and me, inviting us on painting expeditions with her. I wrote the poem with which this blog begins after a day with Marike and Paul and Dee in the sun in San Juanico.

Mexico is on my mind. Marike and I will soon be heading back to the boat, which is in La Paz right now. I probably won't post for a few days--too much to do before we go away. But I'll have plenty to show and tell once we get settled on the water, I promise. In the meantime, I hope these pictures keep you dreaming with us....